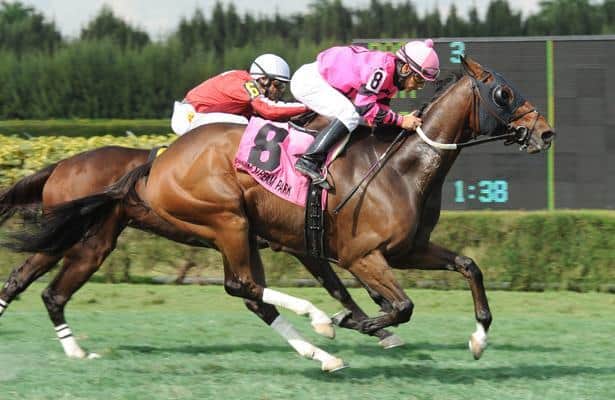 Still showing the competitiveness and consistency that has earmarked his career, Bad Debt will open his 8-year-old campaign in a familiar spot.

A 15-time winner who has hit the board in 42 of 57 career starts over five racing seasons, the bay Grand Reward gelding will compete for the fourth consecutive year in the $100,000 Sunshine Millions Turf, one of five stakes races worth $700,000 on the 13th annual Sunshine Millions program.

“I hope this is his year,” Trombetta said. “Hopefully, he’s a good fit in the race. He comes into the race in good order. In the little bit of racing we’ve been able to get out of him this fall, he’s run well for us.”

Traveling to Florida, New Jersey, New York, Kentucky and back last year, Bad Debt won one of 10 starts, the Sunshine Millions Turf Preview on November 8 at Gulfstream Park West. Most recently, he was a late-running fourth behind subsequent Fort Lauderdale (G2) winner Mshawish in the 7 ½-furlong El Prado Stakes on December 13.

“He had a little bit of an excuse in his last race,” Trombetta said. “He kind of got stuck in traffic and was put on hold for a little bit and then came running. The horse that beat him came back and won a Grade 2.”

Bad Debt has put in a pair of half-mile works over Gulfstream’s main track in preparation for the Turf, and will have regular rider Paco Lopez aboard. Having earned nearly $824,000 in lifetime purses, Bad Debt has finished in the money in 12 of 17 tries on the Gulfstream grass.

“He’s been wonderful for us,” Trombetta said. “I’m looking forward to it. Hopefully the weather holds out and we get a fair shot at it.”

The Sunshine Millions program was modified this year to allow horses bred in New York, Maryland and Pennsylvania as well as Florida, attracting New York-breds Iron Power and Saint Pierre to the Turf.

Trained by Mike Hushion for Barry K. Schwartz, Iron Power enters the Turf in good form, having finished first or second in each of his last five starts of 2014 including back-to-back allowance wins to close the year.

A 5-year-old gelded son of Mizzen Mast, Iron Power will be making his stakes debut and Gulfstream Park debut in the Turf. He schooled in the paddock and walking ring during Sunday’s races.

“He looks great and I love the way he’s training,” Hushion said. “I’m looking forward to the race very much. It only came about for us about a month and a half ago, but it seemed to fit us pretty well.”

Iron Power went gate to wire in both his recent wins, taking an off-the-turf event in October at Belmont Park and cruising by six lengths in a 1 1/16-mile grass allowance in November at Aqueduct.

“He is usually a little bit forwardly placed,” Hushion said. “He doesn’t necessarily need to be on the lead, but he’ll be up there toward the front.”

New York-based jockey Jose Ortiz, Jr., up for the most recent victory, gets a return call.

Best Plan Yet and Breitling Flyer, who finished 1-2 in the Forty Niner Stakes on Gulfstream’s turf last August, hook up again in the Turf. Breitling Flyer was third in November’s Turf Preview, and pair finished sixth and 10th, respectively, in the Tropical Park Derby last time out.