Vet is 5th to plead guilty in Servis-Navarro drug case 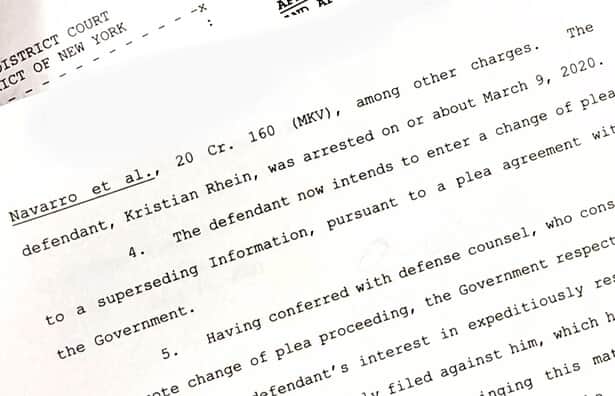 Dr. Kristian Rhein, who is based in New York, made his negotiated plea formal in front of U.S. district judge Mary Kay Vyskocil during a hearing first reported by BloodHorse.

Rhein "now intends to enter a change of plea" and admit he was involved in a scheme "to violate the misbranding and drug adulteration laws of the United States," assistant federal prosecutor Andrew Adams said in a document filed with the Southern District New York court before Tuesday's hearing.

Rhein was arrested in March 2020, one of 27 people named in an indictment that was fueled by an FBI investigation that included wiretaps and barn raids. He, Servis and Navarro were among those accused of illegally doctoring and misbranding performance-enhancing drugs before they were given to racehorses. The drugs were said to have included SGF-1000 and clenbuterol.

Sentencing was scheduled for Dec. 2. Rhein could get up to three years in prison and a fine of as much as $10,000. He was also told to return $1.2 million in money he was said to have made illegally according to BloodHorse.

Rhein brought to five the number of defendants who have negotiated guilty pleas. Some or all are expected to testify against other defendants in the case.

Servis and Navarro said they were not guilty, but Navarro is expected to change his plea at a hearing next Wednesday.