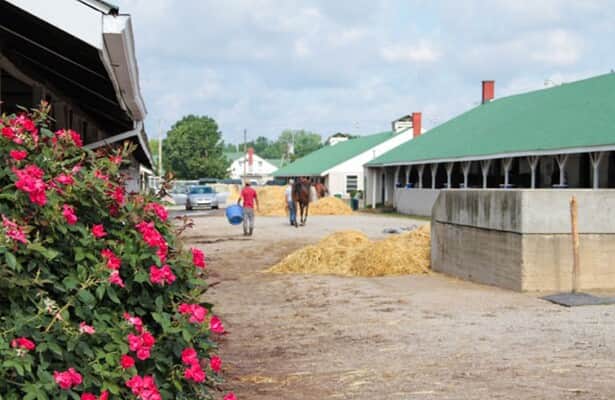 It could be said that no news is good news at Churchill Downs, where the equine-herpesvirus appeared to have been contained at six positive cases.

“That’s a good thing that there really is nothing new,” said Dr. Will Farmer, the equine medical director for Churchill Downs Inc., in a telephone interview Tuesday morning. “There have been no clinical issues at all. We’re continuing twice-a-day temperature checks. Everybody has been completely normal. No issues there.”

It has been a week since a filly trained by Saffie Joseph Jr. displayed symptoms of the herpesvirus. After she tested positive, she was sent to the Rood & Riddle Equine Hospital in nearby Lexington, Ky., and 13 other horses in that barn were quarantined. Five more tested positive by the end of last week.

Eventually, four barns were locked down, including one that was established to isolate the infected horses. A few dozen horses had to stay in their stalls, but no more herpesvirus cases were detected. Outside the four barns, backside activity at Churchill returned to normal Friday, albeit less busy with so much of racing moving south for the winter.

If all continues to go well, the first 13 quarantined horses may be eligible to come out of quarantine as soon as Wednesday.

“There are protocols that this state has in place where horses can start to be retested,” Farmer said from the Global Symposium on Racing in Tucson, Ariz. “(Wednesday) will be the seven-day point. It’ll be up to the trainers if they are going to elect to follow up with some additional testing prior to the two-week point.”

If an owner or trainer wants to foot the bill for testing of any of the original 13 horses before next week, that could get shorten the quarantine period.

“Those horses will be eligible to be tested so that if they come up negative, we can start the clock a little sooner than waiting the full two weeks,” Farmer said. “It’s an option. It’s a function of time and money. If a trainer wants to pay to test more, we can get them moving hopefully quicker if they test negative.”

Horses who show no symptoms for two weeks after being diagnosed with the herpesvirus are usually over it, but Farmer said horsemen and horsewomen still have to pay for the test to prove it.

At least one horse tested positive for the herpesvirus after leaving Churchill Downs last week. Wakanaka, a 4-year-old filly trained by Bill Mott, tested “mildly positive on a nasal swab sample with a very low, viral load,” Dr. Jeff Blea, equine medical director for the California Horse Racing Board, said last week. “This is only one test at a single time point.”

Wakanaka, who had to be scratched from Sunday’s Matriarch Stakes (G1) at Del Mar, was the only one of three Churchill Downs shippers whose test came back positive.

“That was a one-off from Churchill,” Farmer said.

Stopping short of saying the herpesvirus spread had peaked, Farmer said horsemen and horsewomen deserved credit for doing the right thing to contain the outbreak.

“We have put up our heightened biosecurity protocols,” he said. “Our goal is to absolutely get these horses released as soon as possible. That is up to Mother Nature in some ways, but our horsemen have really stepped up. We are very appreciative of our horsemen and the due diligence that they’re doing to help us get this contained and hopefully allow everybody to move on with their winter plans as soon as possible.”

Outbreaks in March at Fonner Park in Nebraska and Parx Racing in Pennsylvania were contained within three weeks. After that, it was business as usual at both tracks.

Without putting a timetable on Churchill Downs, Farmer sounded hopeful that this, too, shall pass.

“In the short term it does cause some pretty big headaches for people,” he said. “I do sincerely sympathize when plans get abruptly changed on them, but I am very appreciative of their cooperation.”