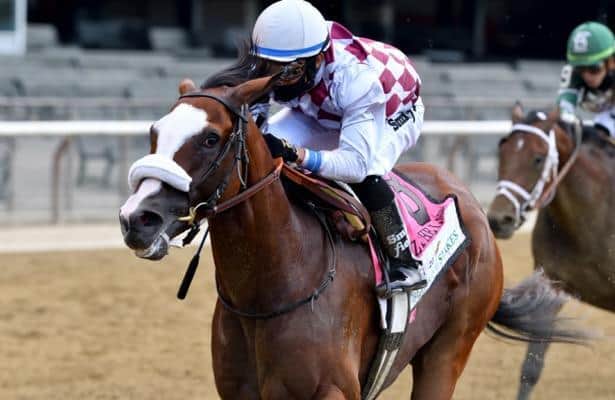 When Louisville police executed a no-knock warrant at the home of Breonna Taylor, a 26-year-old Black woman, and left her dead from eight police-fired gunshots on Mar. 13, it began a firestorm of protests in the city continuing to the present day.

With the 2020 Kentucky Derby in Louisville, the protests -- which are in response to systematic racism in policing -- have impacted Churchill Downs. At a Tuesday protest near the historic racetrack, there were 64 arrests for what was deemed an “unlawful gathering.”

On an NTRA media call on Friday, Barclay Tagg -- trainer of Derby favorite Tiz the Law -- made clear his nervousness over the situation, saying he hoped all involved remain safe throughout the proceedings.

The Tuesday protest was organized by Until Freedom, a group that aims to address systematic and racial injustice. The group had previously called for the Kentucky Derby to be cancelled altogether.

Tagg said he had not had direct communication with Churchill Downs with regards to event security.

“I haven’t talked to them yet,” Tagg said. “We’ve been trying to work out our own trip and work out this last breeze for him and all this kind of stuff and I’ll probably call Churchill tomorrow and see what’s new. I haven’t really discussed it with them.”

Another horseman on the Friday media call, Art Collector owner Bruce Lunsford, took a more measured tone than Tagg. The native Kentuckian and former politician, who ran for U.S. Senate against Sen. Mitch McConnell in 2008, said he did not expect any problems on Derby Day.

“I think it’s under control,” Lunsford said. “I think they got what they wanted, there’s not going to be fans there. I think it’ll go fine, I’m optimistic. We’ve got a lot of reasons to hope it does.”

Louisville Mayor Greg Fischer gave a media briefing ahead of the Tuesday protest, warning protesters that violence or other actions deemed unlawful would be dealt with by police.

“We will not allow unlawful protests,” Fischer said. “If people are blocking traffic, creating dangerous conditions on our roadways or trespassing on private property against the wishes of the property owner, the police will cite or arrest them.”

Fischer also said the protest groups on Tuesday had no history of violence and he did not anticipate any problems.

“They’re coming in for several hours and they’re here to protest,” Fischer said. “They’re here to talk about justice for Breonna and then they get on their buses and go home. These are people who, our experience, again is participating in protest, as is a part of the great American tradition.”