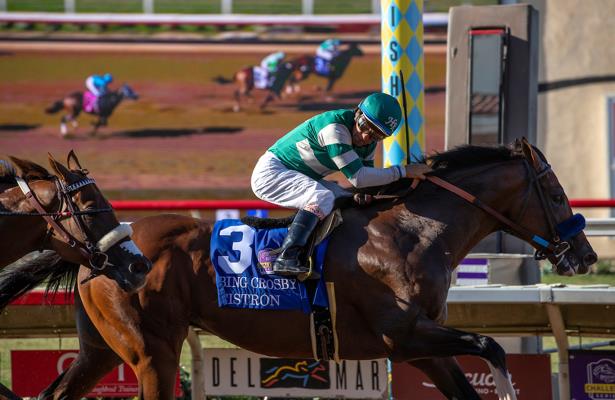 A head shy of seeking his fifth consecutive win, Hronis Racing’s versatile Cistron will instead bid for his third straight as he leads a field of seven 3-year-olds and up going 5 ½ furlongs on turf in Saturday’s Grade 3, $100,000 Daytona Stakes at Santa Anita Park.

Trained by John Sadler, Cistron comes off a narrow victory over the course on March 21 and he appears at the peak of his powers at age 6.

Texas Wedge, trained by Peter Miller, is also seeking his third straight win and along with Doug O’Neill’s Wildman Jack and the Ron Ellis-trained Blameitonthelaw as the contention in Saturday’s Daytona runs deep.

A winner of the Grade 1 Bing Crosby Stakes on dirt two starts back on July 27, he then took the Grade 3 San Simeon Stakes at 5 ½ furlongs on turf here March 21 — earning back-t-back 100 Beyer Speed Figures.  If this 6-year-old full horse by The Factor runs back to his San Simeon, he’ll be plenty tough under regular rider Victor Espinoza.

A winner two starts back of the Grade 2 Joe Hernandez Stakes over the course on Jan. 1, this 5-year-old Colonel John gelding then took an ungraded five-furlong stakes at Gulfstream Park on Jan. 25. Based at San Luis Rey Downs, he’s won three out of his last four starts and four of his six lifetime wins have come on grass. With an overall mark of 14: 6-3-2, he’ll be ridden for the third consecutive time by Flavien Prat.

A lightly raced 4-year-old homebred gelding by O’Neill’s 2012 Kentucky Derby winner Goldencents, he returns from Dubai following a 4 ¾-length win in a Group 3 turf sprint contested at six furlongs. With all seven of his career starts coming in turf sprints, Wildman Jack, who has three wins, has been off the board only once. Fleet of foot early, he’ll be ridden for the first time by Mike Smith on Saturday.

The Daytona goes as the fifth race with an approximate post time of 5:30 p.m ET.