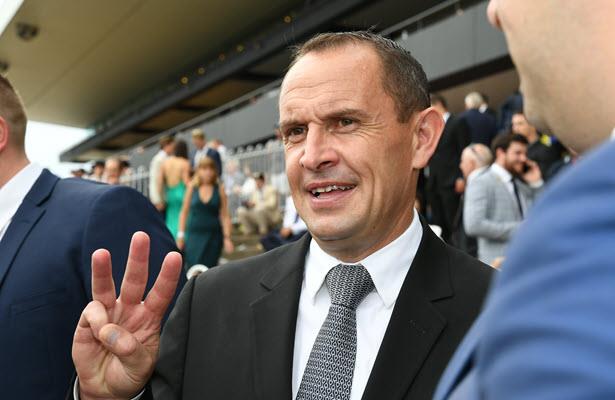 Racing behind good cover in mid-pack, 5-year-old mare Verry Elleegant (4-1) made her decisive move in the last half-mile and held off Coolmore colt Anthony Van Dyck (5-1) on Saturday to win the $3.5 million Caulfield Cup (G1), the first of the three big races of the Melbourne Spring Carnival in Australia.

Trained by Chris Waller of Winx fame and ridden by Mark Zahra, who was substituting for James McDonald, Verry Elleegant earned her sixth Group 1 victory in becoming the third mare to win the 1 1/2-mile handicap in the last 10 years.

Third in the 2019 Breeders’ Cup Turf, Anthony Van Dyck overcame post 17 in the field of 18. Carrying Winx’s old jockey Hugh Bowman and eight more pounds (129) than the winner (121), he went wide to make up 10 places in the last quarter-mile and finished just a short neck behind in second.

“She’s tough,” Zahra said after winning the stretch duel. “That horse joined her, and she pulled something out.”

The New Zealand 5-year-old entire The Chosen One (60-1) finished a length behind the winner in third with 8-year-old gelding Prince Of Arran (16-1), second in last year’s Melbourne Cup (G1), nearly another length back in fourth.

The winning time of 2:31.97 on a soft counterclockwise course marked the third year in a row that the race took more than 2 1/2 minutes to be won. Twelve of the previous 15 runnings were faster than that.

Verry Elleegant shortened to 9-1 and Anthony Van Dyck 10-1 to win the Nov. 3 running of the two-mile $5.1 million Melbourne Cup at Flemington. The 5-1 favorite is Tiger Moth, a 3-year-old colt that is a stablemate of Anthony Van Dyck in Aidan O’Brien’s Irish stable.

Sired by the New Zealand-bred stallion Zed out of the Danroad mare Opulence, Verry Elleegant could become the first female to win the Melbourne Cup since Makybe Diva’s record three in a row (2004-06).

Waller knows that winning the Caulfield Cup is as good a springboard as any.

“It’s the best form I think for any Melbourne Cup,” he told National Sport News of Australia. “With her weight (assignment of at least 121 pounds) obviously it’s going to be difficult, and she’s got to settle and do things right.”

Waller watched the race on television from Sydney, where his horses Haut Brion Her and Nature Strip were finishing fifth and seven, respectively, in The Everest. Caulfield Racecourse was closed to spectators because of the pandemic.

After beginning her career in New Zealand for Nick Bishara, Verry Elleegant was transferred to leading trainer Darren Weir in time for the 2018 Australian spring. She was moved again to Waller before 2019 after Weir was suspended for four years after being caught with buzzers in a police raid on two of his barns.