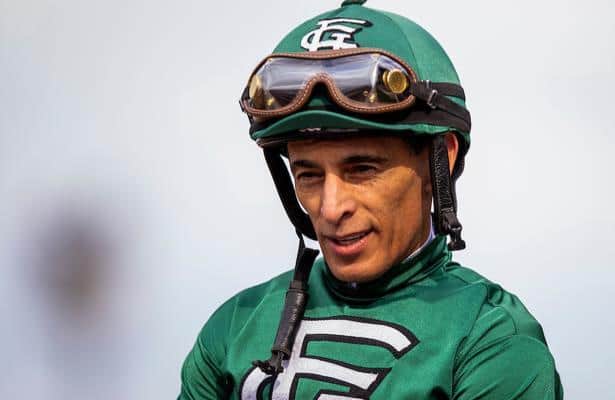 Hall of Fame jockey John Velazquez will appeal the three-day suspension handed down by California stewards on Sunday, according to his agent, Ron Anderson.

Velazquez was suspended for his ride on 9-10 favorite Following Sea in Saturday's 11th race, a maiden special weight that was the last on the card.

He finished second, behind Defunded. After an inquiry, Following Sea was disqualified from second and placed third for crossing over on third-place finisher Mr. Impossible without sufficient clearance.

Velazquez’s suspension dates are March 14, 19 and 20, and Anderson said that won't work.

"We would miss the races at the Fair Grounds, of which there's eight stakes — he rides a horse called Proxy for a million dollars" in the Louisiana Derby (G2). "If we do ride that day, we would have to give another day back, which would be Florida Derby day (March 28). So we can't really do that. So the circumstances of all this were just to appeal."

Anderson said he and Velazquez have a week to appeal, but that "it'll be cleared up in the next day or so. But we're kind of forced to do what we're doing. … Sometimes we do what we have to do rather than what we really want to do. I was hoping we could make some other arrangements.

"The rules are pretty sticky in California about when they slap you with the days," Anderson said. "They land on Sundays, Friday, Saturday — with Saturdays no good."