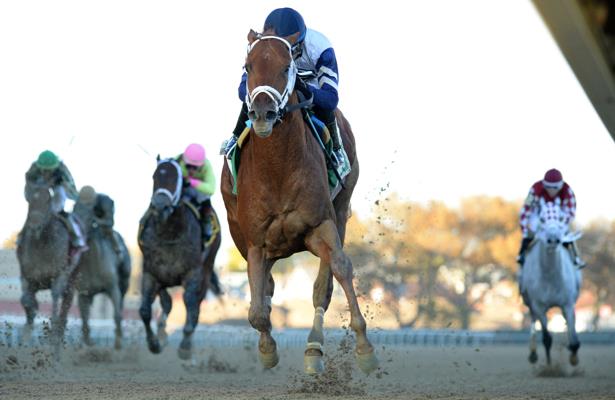 Owner Randy Hill of R.A. Hill Stable has enjoyed a successful Belmont Park meet with two stakes winners this season. But with only two weeks left of the meet, the fun could only be getting started for Hill, who sends out three formidable stakes contenders Saturday.

Spearheaded by Grade 1 Carter winner Vekoma in the $500,000 Met Mile (G1), Hill also is the park owner of Up In Smoke who makes her graded stakes debut in the $100,000 Victory Ride (G3), as well as Grade 1 winner Channel Maker who seeks his third victory at such caliber in the $400,000 Manhattan.

Trained by George Weaver, Vekoma provided Hill with a stakes triumph during the Belmont meet with a sensational 7¼-length romp in the Carter, where he registered a 110 Beyer for the performance.

Vekoma will square off against three other Grade 1 winners including last year's Met Mile runner-up McKinzie.

"It's a tough race,” Hill said. “McKinzie is about as good of a horse as there is currently.

"You worry about a possible bounce, but if he runs back to his last race, he'll be tough. I've got all the confidence in the world in this horse. He's training well so we're ready as we can be."

Owned by Hill in partnership with Gatsas Stables, Vekoma won the Nashua (G3) at 2 and the Blue Grass (G2) at 3 years old en route to a 13th-place finish in the Kentucky Derby. He has done no wrong in two starts since the Run for the Roses and made his seasonal bow with a 3¾-length win in the Sir Shackleton on March 28 at Gulfstream Park.

Up In Smoke has never raced outside of her native Florida, encompassing five starts. That will change when the stakes winning daughter of The Big Beast takes on four others in the 6½-furlong Victory Ride.

Also conditioned by Weaver, Up In Smoke has won all but one of her five career starts. Her lone defeat was a distant fourth going two turns in the Hollywood Wildcat at Gulfstream Park, where she finished 10½ lengths to graded stakes winner Tonalist's Shape.

Up In Smoke, owned by Hill in partnership with Black Type Thoroughbreds, arrives at the Victory Ride off of a triumph in the Game Face on June 6 over the South Florida oval.

"We think she's talented and this is the right spot for her," Hill said. "There wasn't anywhere else for her to run and she was ready to run. Outside of that race, she's unbeaten."

A winner of Belmont Park's Joe Hirsch Turf Classic (G1) in September 2018 and the Man o' War (G1) in May 2019, Channel Maker has finished a respective eighth and fourth in the prior two editions of the 1¼-mile Manhattan.

A recent troubled eighth in the Tiller on June 4, Channel Maker, trained by three-time Manhattan winner and Hall of Famer Bill Mott, has not displayed frontrunning fashion since a half-length runner-up finish to Arklow in last year's Joe Hirsch Turf Classic, but Hill would like to see his horse put such ways on display.

"He's been the subject of about three or four bad trips in a row,” Hill said. “I hope that he goes to the front, because I think that's what he's best at.

“He's a difficult horse to ride and Jose was able to get him to relax (in the Joe Hirsch Turf Classic). That was his best race that day. He ran a 108 Beyer and we haven't been able to do that since. Belmont is his favorite surface."

Hill praised New York-bred Funny Guy, who won the Commentator earlier this meet for trainer John Terranova off a nine-month layoff. The Big Brown bay recorded a 101 Beyer for the performance and could step up to open company next out.

"I love that guy," Hill said. "We think he's open stakes quality and he did that off the bench. I've got some nice horses right now."