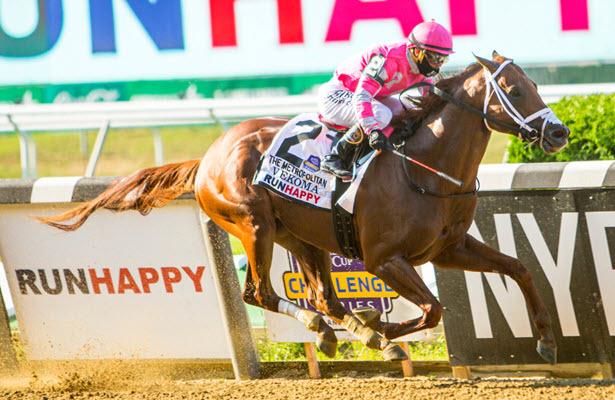 Vekoma broke in front and dug in late to fend off all comers and earn a second consecutive Grade 1 win in the $500,000 Metropolitan Handicap (G1) at Belmont Park on Saturday.

Sent off the 9-5 co-favorite under Javier Castellano, Vekoma ushered the field--which featured four Grade 1 winner--through fractions of :22.73 and :45.87 with longshots Warrior's Charge and Network Effect stalking the pace. Co-favorite McKenzie was content to race in the middle of the eight-horse field with multiple Grade 1 winner Code of Honor trailing the field.

Vekoma continued to motor on the lead through six furlongs in 1:09.57, but on the turn the lead shortened and the pack tightened. Just as it looked like Vekoma was primed to be overtaken, the son of Candy Ride found another gear in the final furlong and pulled clear to win by about 1 1/2 lengths.

Castellano said he was surprised to be the pacesetter with Vekoma, noting he thought he would sit behind Warrior's Charge and Mr. Freeze early.

"You never know in this game. Sometimes you handicap the race and then you have to throw it out when you break out of the gate," Castellano said. "I made a decision and used my best judgement and I think it paid off today.

"The way I handicapped the race, I thought I would sit behind the two outside horses [Mr. Freeze, No. 7; and Warrior's Charge, No. 8] and then go around them and get it done," Castellano continued. "But he broke so well out of the gate, I didn't want to take away anything that comes easy. I dictated the pace in a nice way and he took it from there.

"They came after me at the three-eighths pole, but he's such a great horse and such an honest horse. The further he went the stronger he got."

Network Effect, who saved ground while stalking along the rail throughout, crossed the wire second ahead of Code of Honor and Warrior's Charge.

Trained by George Weaver, Vekoma completed one mile in 1:32.88, which was just a few ticks off the track record. He paid $5.90 and with the win earned an all-expenses paid berth into the Breeders' Cup Dirt Mile at Keeneland later this year.

#2 Vekoma (9/5) takes them all the way in the Met Mile (G1) under @jjcjockey pic.twitter.com/czQitjRdDK

In contrast to Castellano, Weaver said he did expect to see Vekoma on the lead, noting "I thought we had the most natural speed.

"I was happy with our trip around the backside," Weaver said. "I knew we had natural speed, and no one really went with us so I was happy with the fact that he was there. At the quarter pole, it seemed like all comers were coming and I thought 'Man, does he have anything left in the tank or not?'. When they got to the eighth pole and I saw him rebreak and keep going, I got excited. It was fun.

Vekoma, a veteran of last year's Kentucky Derby, has blossomed into one of the country's top sprinter-milers as a 4-year-old. He opened the season with an open lengths win going seven furlongs in the Sir Shackleton at Gulfstream Park and returned with a dominant 7 1/4-lengths win over Network Effect in the Grade 1 Carter on June 6.

Owned by R.A. Hill Stable and Gatsas Stables, Vekoma now surpasses $1 million in earnings with a record of 8: 6-0-1.

Weaver said the 1 1/4-miles Whitney (G1) at Saratoga on Aug. 1 is under consideration for Vekoma, but the seven-furlong Forego (G1) on Aug. 29 in upstate New York is more likely.

"We're going to nominate to the Whitney for sure, but he's run two huge races back-to-back," Weaver said. "The most likely scenario, to me, is that he would come back in a race like the Forego. We want to plot a campaign to get us to the Breeders' Cup, so we'll take a look at the calendar and go from there."

*Rating is based on HRN fan votes, which rank the Top Active Horses in training.
Code of Honor Vekoma McKinzie Metropolitan Metropolitan (2020)