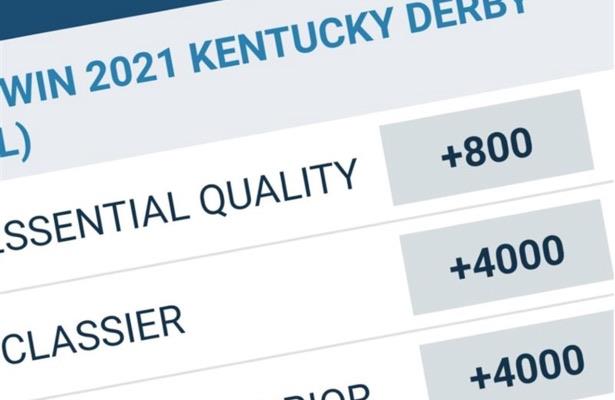 Johnny Avello admitted it. But that did not stop him from booking thousands of futures bets months ahead of the 2021 Kentucky Derby.

That was one way that he attracted a legion of appreciative horseplayers for 13 years when he ran the Wynn Las Vegas race and sportsbook until 2018. He hopes regulators in any number of states eventually will let him to do it in his current role running DraftKings Sportsbook.

[RELATED: Shirreffs, Moss have a new 50-1 shot for the Kentucky Derby]

While he waits to one day book horse futures again, he is not about to be a complete bystander. Avello has maintained his sharp eye for 2-year-old prospects that are going on 3-year-old standouts. From his Las Vegas perch, he continues to be on the lookout for long, early odds on Derby horses that might have some flaws but that also might end up in the gate come May 1.

“We want some prices, don’t we?” he asked. “We don’t want to be fooling around with any short futures prices with months to go.”

With that in mind, Avello identified a Derby dozen, 12 juveniles that might be worth a look while they carry big odds in the current futures market. So as not to appear to be leaning to any one horse, they are listed alphabetically with their current odds at William Hill Nevada.

Off the work tab since his debut, this $120,000 Violence colt caught Avello’s eye with his front-running win in August at Del Mar. So did the trainer and his six Derby trophies. “That’s a Bob Baffert maiden special weight,” Avello said. “We’ll see how he comes back.” Jack Wolf, a partner in 2018 Triple Crown winner Justify, has a share of Freedom Fighter.

If not for a bad start in his debut, this black-type stakes winner on the Breeders’ Cup Friday undercard might already be 3-for-3. He also has a 96 Beyer that is second among 2-year-olds only to Jackie’s Warrior’s 100. “That’s a Chad Brown horse that is not that long at this point,” Avello said. The $240,000 colt owned by Seth Klarman is by Into Mischief, the sire of this year’s Kentucky Derby and Breeders’ Cup Classic winner, Authentic.

By Tiznow out of a Malibu Moon mare, this maiden winner was second in the Iroquois (G3) before being forced wide against tough competition in his last race. “He was third in the Champagne (G1) to Jackie’s Warrior and Reinvestment Risk,” Avello said. “He’s a Steve Asmussen horse that could move forward.” Could this $525,000 colt owned by Winchell Thoroughbreds be the horse that gives Asmussen his first Derby win after 21 misses?

Here is another Violence colt that has not worked since his debut win. In this case, it happened during what normally would have been Belmont Stakes week in New York. “Todd Pletcher has this horse,” Avello said. “I know it was back in June, but that’s something I would look at.” Mike Repole paid $175,000 last year for Prisoner, who was making his third trip through the sales ring at the time.

This gelding by Will Take Charge carries a big price in spite of his first-out victory last month for trainer Donnie Von Hemel. “It’s a maiden special weight winner that won at Keeneland,” Avello said. He has the makings of a rags-to-riches story after Texans Norma Lee Stockseth and Todd Dunn bought him last year for only $12,000.

Sired by Munnings and bought by Rick and Luke Kueber and Ten Strike Racing last year for $265,000, this is a stablemate of Breeders’ Cup Juvenile winner Essential Quality. He broke his maiden in his third start for trainer Brad Cox. Avello took notice of where he did it. “That was a maiden special weight at Churchill Downs,” he said. “It’s always nice to see a (Derby) horse win over the surface.”

This 1-for-2 Paul Reddam homebred is trained by Doug O’Neill, who also looked after Team Merchant’s Derby-winning sire Nyquist. “A Nyquist horse (Vequist) also won the Breeders’ Cup Juvenile Fillies,” Avello said. “He hasn’t run since he broke his maiden during closing week at Saratoga. That’s why you can get a price on him.”

With two wins and a second in four starts, this Commissioner colt is trained by Dale Romans, who is 0-for-11 in the Derby. An empty seventh in the Iroquois contributed to his long odds. But as Avello pointed out, “he was a more recent winner three weeks ago at Churchill Downs.” Romans bought Ultimate Badger for $140,000 last year on behalf of Jim Bakke and Gerald Isbister. They also own four-time graded-stakes winner Mr Freeze.

Kaleem Shah bought this Ghostzapper colt for $750,000. After missing the break in his Del Mar debut, he came back to win on his second try there this summer for trainer Simon Callaghan. “That was really late in the meet, too,” Avello said. “I’m looking forward to seeing that horse run again.” Vittorio has not been on the work tab since his August victory.

Owned by Phoenix Thoroughbreds and Ron Winchell, this $875,000 colt by Into Mischief came back last week from a 4 1/2-month break for his first timed breeze since he finished first in his debut. “He won a maiden special weight in June,” Avello said, “he’s trained by Asmussen, and he won at Churchill Downs.”

The other two horses in Avello’s dozen are not posted at William Hill — at least not yet.

Once again, Avello found an attractively familiar name on the sire line. “He was just a winner by Violence,” he said. This Tom Durant homebred is a Bret Calhoun-trained gelding that finished first late last month in a black-type stakes at Remington Park. That partially made up for his being no factor there in his stakes debut in September. Currently 2-for-4, Game Day Play is 100-1 at Bovada.

This three-time winner with a best Beyer of 90 for trainer Mike Maker does not appear to be listed anywhere as Derby futures option because he is a grass horse. He just won the Breeders’ Cup Juvenile Turf at odds of 30-1. Avello said that a bettor asking for a price on this Declaration of War colt could do worse. “A horse like that probably could transfer over,” he said. “He broke his maiden on the dirt at Saratoga this summer.”

Conspicuous by their absence from Avello’s list are Breeders’ Cup Juvenile winner Essential Quality, the current 8-1 futures favorite, and Jackie’s Warrior, the former favorite that was vanquished at Keeneland.

Avello said the price is also wrong for Dr. Schivel (50-1), another Violence colt that is on an autumn break after winning the Del Mar Futurity (G1). “He’s probably too short,” he said. “I don’t know if I’m interested in that.”

Who really does in a way that breeds long-term confidence? Avello tries not to get swept up in a horse’s precocity, especially since there will be plenty of other contenders growing into their 3-year-old form in the next 5 1/2 months.

“I certainly need more time to evaluate it,” Avello said. “A lot of these horses don’t have more than a start or two. Some that I might look at don’t have any.”

Then he dropped a little 2020 bon mot when he said, “Who knows? Maybe they’ll run the Derby in September again.”