Varda wins Starlet after Princess Noor pulled up in stretch 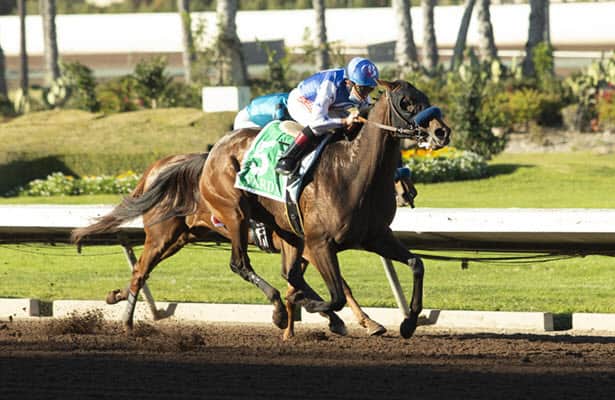 Odds-on favorite Princess Noor cruised up to the lead on the second turn and was well clear of the field entering the stretch of Saturday's Grade 1, $300,000 Starlet Stakes at Los Alamitos.

At the top of the stretch, Princess Noor was suddenly pulled up by Hall of Fame jockey Victor Espinoza. With trainer Bob Baffert's star filly failing to persevere, it was stablemate Varda – who had launched a rally from the back of the pack --  who surged past Baffert's third runner, pacesetter Kalypso, to win under Drayden Van Dyke by 1 1/2 lengths.

Varda paid $37.80 as the fourth choice in a five-horse field. Following runner-up Kalypso across the wire were Nasreddine and Astute. As an official prep for the 2021 Kentucky Oaks, the Starlet awards qualifying points on a 10-4-2-1 scale to the top four finishers.

“She always tries hard,’’ said Van Dyke of the winner. “She broke well and we just waited. She needed every bit of that long stretch.’’

"Victor said he pulled her up right away. He said it didn’t look real bad. It was her left front," Baffert said.

“It’s soft tissue. I don’t know if she hit herself. She’ll be fine. She didn’t break anything.’’

By Distorted Humor, Varda was a $700,000 auction purchase at this year's OBS April 2-year-olds in training sale. She was a debut winner at Del Mar going six furlongs Aug. 30 and came back to be second to Princess Noor by 8 1/4 lengths in the Sept. 26 Chandelier Stakes (G2) at Santa Anita.

“(Varda) had been working really well and she looked like the kind of filly that the farther the better with her, so that’s why we’ve been waiting and waiting with her," Baffert said.