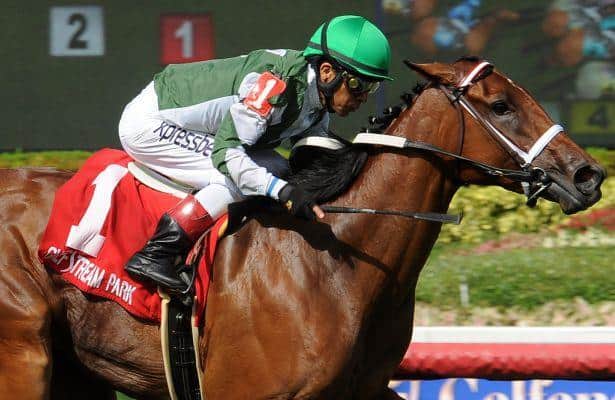 Elm Racing LLC's Urtheoneeyelove made the best of a road trip to Gulfstream Park Saturday, winning the $60,000 Betsy Ross Handicap with a perfect trip under Hall of Fame jockey Edgar Prado.

Based in Kentucky with trainer Eric Reed, the daughter of Congrats was the recipient of a ground-saving 7 1/2-furlong tour of the Gulfstream turf course, tracking early pacesetter Katie's Kiss into the stretch before kicking clear by 2 3/4 lengths at the finish of the overnight handicap for 3-year-old fillies.

"She ran good, it worked out like they planned it," said Prado, whose mount was co-third choice at 5-1. "She kept up with the pace and she finished beautiful. She made the turn really well and she took off."

Urtheoneeyelove had run in three straight Grade 3 stakes prior to notching her first stakes success in the Betsy Ross. The Kentucky-bred filly ran 7 1/2 furlongs in 1:28.45 to provide Reed with his second stakes victory with a Gulfstream ship-in this season. On May 29, Reed-trained Street of Gold, who is entered in Sunday's Spook Express Stakes, captured the Amelia Island.

Katie's Kiss, the 5-2 second choice who stretched out around two turns for the first time, held second-place, 2 3/4 lengths ahead of Afleet Mary. Westminister Road, the 2-1 favorite in the field of nine, was never a factor during a sixth-place run.

The 20-cent Rainbow 6 carryover jackpot pool be guaranteed at $100,000 for Sunday’s Summit of Speed program at Gulfstream.

There were no tickets with all six winners sold Saturday, resulting in a payoff of $4,892.82 for those with five of six winners.

In Pick 5 wagering Saturday, no one bought a ticket with all five winners, resulting in a $373.95 payoff for four of five winners.

Trainer George Handy, 92, sent out Secret Memory for a victory in the second race at Gulfstream Saturday, one day before fellow trainer Jerry Bozzo, 94, will be represented by Flutterby in Sunday’s $250,000 Princess Rooney (G2).

The victory by Secret Memory was the 6-year-old mare’s second victory in her last three starts for Handy, owner Barbara Ann McDonnell and jockey Jose Caraballo.

Inducted into the New England Turf Writers Association Hall of Fame in 2008, Handy started his career after getting out of the Navy. He trained at Lincoln Downs and Narragansett Park early in his career before spending his first winter in Florida in the early 1950s. Handy has saddled 1359 winners since 1964. He saddled Illinois Derby winner Paristo for a third-place finish in the 1981 Preakness Stakes.

The popular horseman will turn 93 on July 13.

Shifman: What the top Derby contenders have in common
Media members voted Essential Quality and Greatest...

First Look: 3 Derby preps lead 12 graded stakes this week
This time next week, we will have new names at or...