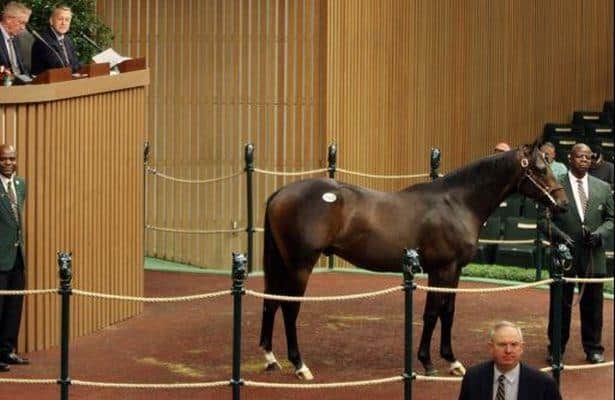 Buying a yearling is one of the most difficult aspects of horse racing. Sixteen million dollars can buy a dud, such as The Green Monkey, while $10,000 can buy a star, such as California Chrome.

It is not an exact science, but horses with higher price tags justifiably have higher expectations. Seven yearlings were purchased for seven figures in public actions this year.

Here, we take a closer look at these seven colts and fillies and update their progress heading into their 2-year-old seasons.

Owner Joseph Allen has been in the game for a long time. He owned the great War Front, Volga and Political Force, among others. He has cut back recently as an owner but went all out for this Quality Road filly. Allen's horses are primarily based on the East Coast and Shug McGaughey's former assistant, Robbie Medina, helped pick out this filly, making one think that McGaughey could wind up training her.

This half-brother to the talented Travel Column could be Speedway Stables' next star. They campaigned Roadster and Collected with Bob Baffert and already have committed to him as the trainer of this pricey American Pharoah colt. With precocious breeding and connections, this colt is a good bet to be the first on this list to make his debut if all goes well. Look out for him at Del Mar.

This daughter of Alabama (G1) winner Embellish the Lace already has been named Tap the Faith. Bought for the legendary Claiborne Farm, this filly likely will be based on the East Coast.

This half-sister to Constitution joins Mandy Pope's stacked roster of youngsters at Whisper Hill Farm, a stable that includes America's Joy, an $8.2 million yearling from last year. Todd Pletcher trains many of Whisper Hill's horses, and it would be no surprise to see this expensive purchase wind up in his care. She could make her debut at Saratoga if everything goes well.

Agent Mike Ryan purchased this full sister to multiple Grade 1 winner Air Force Blue and has named her American Heroine. There has been no word yet as to which barn she will end up in.

This $1 million filly was bought for Baoma Corp., which has enjoyed much success with Bob Baffert over the years. The owners of Drefong and Bast also will entrust Baffert with this Quality Road filly. Look for her at Del Mar if all goes according to plan.

OXO has been no stranger to spending top dollar in recent years and the stable has high expectations for this colt by leading sire Into Mischief out of the Grade 2 winning dam Curlina. The majority of OXO's horses are trained by either Chad Brown or Brad Cox. With both trainers enjoying successful years, it is highly likely that one of them will get their hands on this colt.