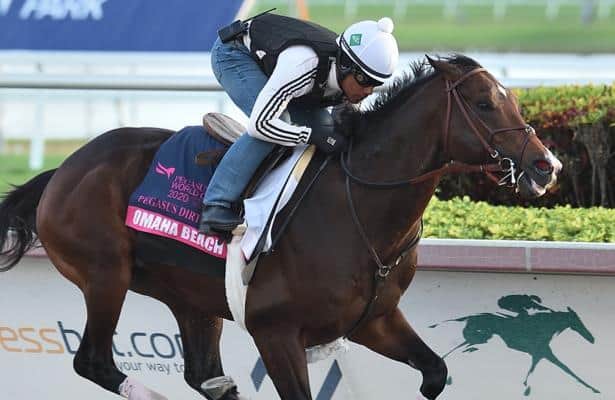 With news Thursday morning that second morning line choice Spun to Run has defected from the Grade 1, $3 million Pegasus World Cup at Gulfstream Park, so too arrived an updated look at the odds for Saturday's race.

“After he came to Palm Meadows [Training Center] we noticed he was a little hot so we clipped his hair,” trainer Carlos Guerrero said of Spun to Run, who was originally installed at 7-2. “Then two weeks later we noticed some spots, hives on his body. We wanted to run, but he’s a little hot and sore and we always want to do the right thing for the horse. It’s unfortunate, but we want the best for him.”

The Pegasus is down to 11 runners led by Omaha Beach, whose price dipped from 7-5 to even money. Here's an updated look at post positions, odds and analysis for the Pegasus, in which contenders will run free of race day medication, including Lasix.

2. Tax, 8-1 (Danny Gargan/Jose Ortiz): This gelding ran a sneaky-good second in Aqueduct’s Discovery Stakes (G3), producing big numbers on Nov. 30 behind Performer, who's one to watch this season as an older horse from Shug McGaughey's barn. There's a case to be made that he's improving, and Spun to Run's defection could make it significantly easier for the front-running type to hang around at a price.

3. Diamond Oops, 15-1 (Patrick Biancone/Julien Leparoux): No doubt this gelding loves Gulfstream Park with a 5-for-6 record locally, but what about the distance? We don’t have a true gauge, as Diamond Oops stumbled at the break of his prior two-turn dirt try in the Breeders’ Cup Dirt Mile. Since the draw, have seen many arguments that he'll garner support and go off well below the morning line price.

4. Seeking the Soul, 30-1 (Dallas Stewart/John Velazquez): He won one of eight starts in 2019, that being the Stephen Foster (G2) over his favorite track at Churchill Downs. The form that got him a second in this race a year ago may be in the rearview mirror for the 7-year-old, who’s looked a step slower lately.

5. Omaha Beach, 1-1 (Richard Mandella/Mike Smith): The heavy favorite here has had just one hiccup on his way to the Pegasus, that being a foot bruise that shifted his work schedule but now seems behind the newly turned 4-year-old. Here, he’ll have to stretch back to 1 1/8 miles for the first time since April, but the race setup doesn't seem nearly as urgent with Spun to Run no longer positioned to Omaha Beach's outside.

6. Higher Power, 6-1 (John Sadler/Flavien Prat): Since breaking out for new connections in the Pacific Classic (G1), he earned a pair of thirds in Grade 1 company in California, but only after stumbling at the start in the Awesome Again and breaking slow in the Breeders' Cup Classic. If Higher Power can get away cleanly and repeat that Del Mar effort, he holds an upset chance.

7. War Story, 30-1 (Elizabeth Dobles/Joel Rosario): Just when you think this guy’s done, he delivers a winning performance in the Harlan’s Holiday (G3) and is on to the Pegasus — for a third time — in a new barn. The 8-year-old no longer looks like a plodder, but rather a mid-pack runner who could get an earlier run on to the board. Spun to Run's scratch doesn't help his chances, however, as that one figured to tire out other pace types.

8. Mr Freeze, 20-1 (Dale Romans/Luis Saez): The dominant winner of the 2018 West Virginia Derby (G3) hasn’t duplicated that effort, but there have been flickers, namely a victory in the 2019 Ack Ack (G3) at Churchill Downs. The thinking here is we haven’t seen his best lately. But can Mr Freeze get back to it?

10. Mucho Gusto, 9-2 (Bob Baffert/Irad Ortiz Jr.): He tailed off when fourth in the Oklahoma Derby (G3) last September but earned a pair of Grade 1 placings previously in the Haskell (G1) and Travers (G1). Interestingly, he shows up here with new Saudi Arabian ownership, with this viewed as a prep for the Feb. 29 Saudi Cup. He's in position to be controlling speed on the outside. But will Mucho Gusto have the right amount of staying power off the layoff?

11. Tenfold, 30-1 (Steve Asmussen/Tyler Gaffalione): This horse jumps up once in a while to deliver big efforts, such as his wins in the 2018 Jim Dandy (G2) and 2019 Pimlico Special (G3). But we’re past eight months since he’s hit the board. Works haven’t been especially sharp for this spot, either.

12. Bodexpress, 30-1 (Gustavo Delgado/Emisael Jaramillo): Despite moving through conditions with two post-Preakness Stakes victories, antics at the gate may have cost him again in the local Pegasus prep, the Harlan’s Holiday (G3). Surely, though, we haven’t seen his best, if at least he can get the mental side of the game down. He has speed, and he'll need it on a short run to the first turn.

Analysis: As reflected in a move from 7-5 to even money, Omaha Beach's chances of winning this race significantly improved with Spun to Run out of the picture. Omaha Beach thrives on a strong middle move, and his way to the front became that much easier given the pace should either, A, be run much slower, or B, come back to him with lower quality horses cutting the fractions.

It’s tough to win big while playing with the general public, but is there really a scenario where Omaha Beach shouldn’t be keyed up and down your tickets? A pair I liked on draw day, Higher Power and Tax, should also benefit from Spun to Run's defection. Meanwhile, I'm thinking much less about the chances of a War Story or Seeking the Soul clunking into the trifecta.

Mr Freeze remains a dark horse worth a spot on your tickets. Word is he's training well, and other recent results have flattered his form going back to the fall.