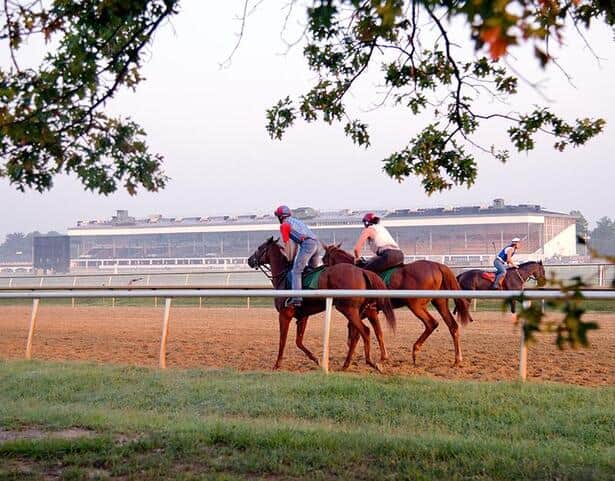 Louis Ulman and Neil Glasser’s Kenny Had a Notion, having won back-to-back stakes on different surfaces against restricted company, gets his biggest test to date in an attempt to extend his streak to three straight in Saturday’s $100,000 James F. Lewis III at Laurel Park.

The ninth running of the Lewis for 2-year-olds co-headlines a nine-race program with the 24th renewal of the $100,000 Smart Halo for 2-year-old fillies, both stakes sprinting six furlongs. First race post time is 12:25 p.m. ET.

Kenny Had a Notion will be facing open company in the Lewis for the first time since his July 30 debut at Delaware Park, where he came from off the pace to get up by a head sprinting six furlongs as the favorite in a maiden special weight.

“We’ll see what he’s made of now. There’s no restrictions on this one,” trainer Dale Capuano said. “I think he’ll run his race. If he’s good enough, he should be tough. We’ll see.”

Kenny Had a Notion returned to Delaware to run sixth in his stakes debut in the First State Dash, contested over a sloppy track. Back at his home track of Laurel, he rolled past fellow Virginia-breds in the 5 1/2-furlong Jamestown on turf, returning three weeks later to cruise by the same five-length margin in the six-furlong Maryland Million Nursery.

Capuano-trained stablemate Alwaysinahurry, second in the Nursery and nominated to the Lewis, came back to beat winners by a neck in a seven-furlong optional claiming allowance Nov. 7 at Laurel.

“After the Maryland Million he’s done so well, and this is the next race for him. So, we’ll see how he does,” Capuano said of Kenny Had a Notion. “I was very impressed with him last time. He showed good speed, he was on the bit the entire race, and when he got through on the inside he just opened up in the stretch. Alwaysinahurry, who he beat and who I still say is a pretty nice horse as well, came back to win the allowance race on Saturday. That just flatters his performance a little bit more, I would think.

“The only time he’s lost so far was that sloppy race at Delaware. He just didn’t it going in that race,” he added. “He was a little bit short, and it’s nice to run him at Laurel because that’s where he trains the whole time.”

Alex Cintron, up for his debut, gets a return call from Post 7 in the field of 10. All horses will carry 122 pounds.

Lugamo romped by six lengths in a seven-furlong maiden special weight Oct. 16 and came back two weeks later with a 4 1/4-length optional claiming allowance triumph going one mile, both at Laurel. Angel Cruz will be back aboard for a third straight time, from Post 9.

“I wasn’t going to run him, but the way he’s acting he’s telling me he’s ready to go again. My only concern is the distance,” trainer Rodolfo Sanchez-Salomon said. “That’s the thing. It’s cutting back but you know, he’s going to run his race. He’s putting himself pretty much on the lead on the time without even being asked, so I hope he can do the same thing again.

“He took the last race like a breeze. He’s a happy horse. He’s doing really, really good,” he added. “He came out of it than he did the race before and the first race even better. He’s such an amazing horse. He’s out there galloping and all he wants to do now is buck, wants to rear up, wants to play. He’s very happy. He’s feeling really good.”

Sanchez-Salomon said Lugamo’s attitude has been the perfect complement to his talent as the colt continues to develop.

“He’s a really, really smart horse. He’s pretty quiet in the shedrow but when the rider gets on him and he gets out to the track, he’s a different horse. He transforms himself. All he wants to do is show that he’s the man,” he said. “What really amazes me is when he comes back and is done training, all he wants to do is lay down until it’s time for breakfast. You can lay on his back and sleep next to him and he won’t even move. That’s the sign of a really nice horse, so I hope he stays like that.”

Colts Neck Stables homebred Dalton will be making his Laurel debut for trainer Jorge Duarte Jr. after alternating his first four starts between Delaware and Monmouth Park. Last out, the Kantharos chestnut stalked the pace before taking a short lead into the stretch, and wound up second by a nose to Pickin’ Time in the six-furlong Smoke Glacken Oct. 24. Pickin’ Time came back to win the Nashua (G3) Nov. 8 at Aqueduct.

Juvenile fillies Out of Sorts and Prodigy Doll, impressive last out winners over Laurel’s main track, will square off for the first time as they make their stakes debut in Saturday’s $100,000 Smart Halo.

Respect the Valleys’ Out of Sorts, a $1,000 yearling purchase last fall, is taking the step up to stakes company just 13 days off a 10 ¾-length maiden special weight romp Nov. 1 at Laurel. The Dramedy filly ran a half-mile in 46.73 seconds before being geared down in the stretch by jockey Sheldon Russell, completing six furlongs in 1:11.62.

“I know it’s back kind of quick but I think her maiden win she did it easy enough and she’s come right out of it so we’ll give it a shot,” trainer Brittany Russell said. “I think she ran a pretty good number. Naturally, I wish she would have broken her maiden a few weeks earlier so we could have given her a little bit more time. She won by a lot but she did it easy. She did it within herself and she’s come out of that race bouncing and doing well, so that’s kind of all you can ask for when you’re trying to wheel one back quick.”

Out of Sorts broke slowly and raced near the back of the field in her debut, a maiden special weight also going six furlongs Sept. 25 at Pimlico Race Course. Favored in each of her two starts, she showed some late interest to get up for fourth and reaffirmed the connections’ faith in her.

“With her it’s kind of been about her mind. She seemed to be fragile-minded early on and after that first run she really seemed like she grew up. She came around mentally. Not that she was ever bad or ever a problem by any means but with the 2-year-old fillies, sometimes they can have all the ability in the world but they have to have the mind to back it up,” Russell said.

“I feel like now she’s had some racing and she kind of gets it, she’s very, very mature in the morning. She’s very businesslike,” she added. “I do know she had the ability. Now that we see her brain can handle it and she’s maturing, I think that makes us feel even better about what we have.”

Sheldon Russell will ride back from Post 2 of eight. All fillies will carry 122 pounds.

“She’s a nice one. She certainly surprised the heck out of me the other day. I talked the owner into letting me run her,” Houghton said. “She won the first time at Penn National and did it pretty easy so you couldn’t really gauge her. It’s a big jump going from a maiden race at Penn National to an allowance race at Laurel. I really liked her and I thought she would run well. Did I think she would run like she did? Not exactly. That shocked me a little bit.”

Prodigy Doll, by champion juvenile Shanghai Bobby, made two starts in Kentucky in June before being sold privately and moved to Houghton, who brought filly Crabcakes to Laurel to win four stakes from 2016-18. The trainer gave her three months between races and she has responded with back-to-back wins.

“When I got her I said we’ve got to give her a little time off. She’d run twice already as a 2-year-old, early, and I don’t like to run them that much,” Houghton said. “We gave her time off and I just freshened her up a little bit.

“She had the experience with two races under her belt, she just needed time. I think that race at Penn National was a good confidence booster for her. She just handled those horses,” he added. “The step up in class is always a concern for me but she came out of the race great, she had a nice, slow easy work the other day and she’s ready. She’s coming into the race perfectly.”

Lucky 7 Stables’ stakes winner Street Lute suffered her first career loss when she finished second by a neck behind Miss Nondescript in the Maryland Million Lassie Oct. 24. In her previous start, she won the 5 ½-furlong Small Wonder Sept. 26 at Delaware Park.

Five fillies exiting maiden victories — Be Sneaky, Supreme Blessing and Swirling Dancer at Laurel and shippers Docs Seven from Arlington Park and Donnybrook Girl from Parx — round out the field.

The Smart Halo recognizes the winner of the first Maryland Million race ever run, the 1986 Lassie, by a neck over In the Curl. A daughter of one of Maryland’s top sires, Smarten, she went three-for-three as a juvenile for Canadian-based trainer Jim Day.