Up With the Birds Flies Away in Jamaica 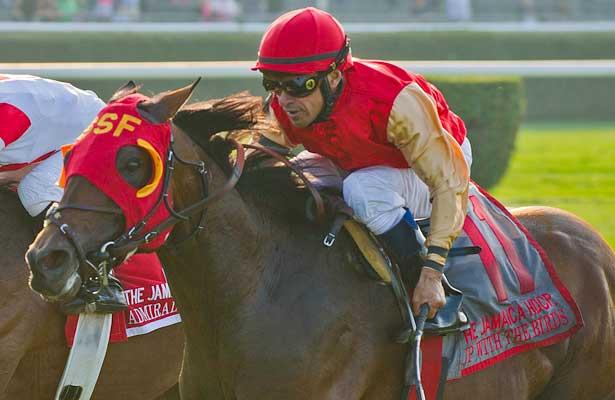 Canadian shipper Up With the Birds, fresh off a pair of starts in his country's Triple Crown series, swooped in to Belmont Park on Saturday and outkicked the field in a powerful stretch drive to win the Grade 1, $500,000 Jamaica Handicap by a half-length.

Reserved well behind an easy pace, Up With the Birds came flying on the outside around the final turn to pass horses with every stride and held off a late bid from favored Admiral Kitten, one of two Grade 1 winners in the 12-horse field.

It was another half-length back to Jack Milton in third, who was followed under the line by Notacatbutallama, Joha, Stormy Len, Mills, War Dancer, Balance the Books, Global Asset, Michael With Us and pacemaker Get in Line. Five Iron was scratched.

The Jamaica was the sixth start of the year and first for Up With the Birds since his victory in the Breeders' Stakes on August 18 at Woodbine, the third leg of Canada's Triple Crown, also run on grass. He was held out of the second leg, the Prince of Wales Stakes at Fort Erie, after running second by a half-length over Woodbine's synthetic track in the Queen's Plate, Canada's version of the Kentucky Derby.

"After he won the Breeders' Stakes at Woodbine, the owners all got together," said Pierce. "This is a big step up from running against Canadian-breds, in a Grade 1 in New York, but we said, 'What the heck. Let's give it a try.' He deserved this chance.

"We freshened him up with this race in mind," added Pierce. "This is his sixth start of the season, but he's run hard every race. We give him plenty of time between his races. We passed the Prince of Wales on purpose. If we'd have won the Queen's Plate, there might have been pressure to run in the Prince of Wales, but this horse has never run on dirt. It looks like his best is on turf, as we found out today."

Breaking from post 11, jockey Cornelio Velasquez was able to move Up With the Birds alongside horses around the first turn and into a comfortable rhythm down the backstretch. Get in Line, coupled with fellow Ken Ramsey-owned Admiral Kitten and entered to ensure a lively pace, led through moderate fractions of 25.34 seconds for a quarter-mile, 49.98 for the half, and 1:13.76 after six furlongs.

Up With the Birds began to roll as the field left the backstretch, and Velasquez swung five wide into the lane to give the 3-year-old son of Stormy Atlantic a clear run. Admiral Kitten got into gear on the outside, while Jack Milton found room along the rail in deep stretch, but neither was able to catch the winner.

"Cornelio did a good job and saved as much ground as he could into the first turn from the wide post we had, but I think he rode him great and kept him out of trouble," said Pierce, who captured his first Grade 1 win as a trainer. "Losing a little bit of ground, he didn't get the horse's momentum stopped which is always a better thing than getting checked in the stretch behind a horse that's stopping."

"I was a little worried that they were going a little too slow up front, and we were eight or nine lengths out of it, but he's a nice horse and he kicked when he asked him," said Pierce. "We just wanted to keep him against straight 3-year-olds and this looked like a nice spot to try. We're sure happy to be here and happy with the outcome."

It was the fifth runner-up finish in his last six starts for Admiral Kitten, who won the Grade 1 Secretariat on August 17 at Arlington Park in his most recent start.

"He ran excellent," said jockey Rosie Napravnik, also aboard in the Secretariat. "The pace was absolutely pedestrian. He's the kind of horse that you can't change his running style. He just lags around the first turn and makes a big run. He ran huge."

Claimed for $80,000, Lasting Legacy to try BC Sprint
Despite what are sure to be long odds of winning,...