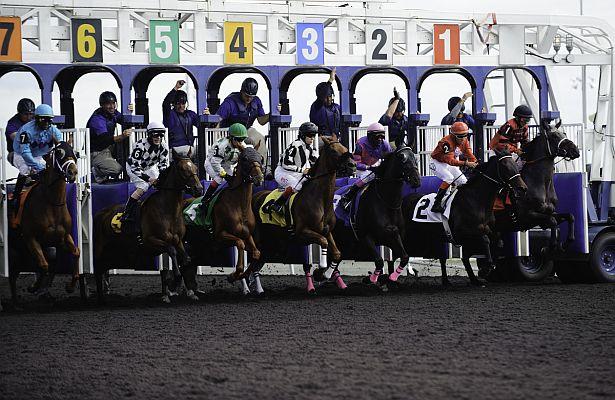 Trained by Roger Attfield and ridden by Justin Stein, the chestnut homebred by Lemon Drop Kid out of Banga Ridge, arrived at the 1 1/16-miles 'Poly' stake from a fifth-place run in the Woodbine Oaks which was won by the eventual Queen's Plate champ Lexie Lou.
Following the scratch of My Heart's Love, all five remaining Bison City starters arrived from the Oaks with Wild Catomine, runner-up that day to Lexie Lou, sent to post as the 6-5 mutuel favourite.
Hot and Spicy broke sharply from the gate under rider Luis Contreras, but was soon joined by Unspurned and Wild Catomine who battled for pole position through the first turn as Contreras took back with his mount.
Unspurned would take command down the backstretch reaching the half-mile in :46.53 and three-quarters in 1:10.91 as Wild Catomine and Hot and Spicy continued to track her pace. Hot and Spicy was urged into action by Contreras through the turn and took aim at Unspurned, but the chestnut turned back their advance and powered to the wire a 2 1/4-length winner in a final running time of 1:45.47.  Hot and Spicy stayed on for place over Paladin Bay.
Stein was happy to set the pace in the Bison City as his filly earned her first added-money score.
"I have a lot of faith in this barn's ability to have a horse ready on the right day," said Stein. "I wasn't too worried about being on the lead with her, she was just loping within herself. I was really surprised to see the fractions that we set. We had a nice breather turning for home and she stayed steady."
Unspurned, noted as being warm in the paddock on Oaks day, was saddled outside in the walking ring this afternoon by Attfield.
"She just didn't feel comfortable in there (the paddock.) She wasn't shaky, to be honest with you, she was just hot, but I thought there was a lovely breeze today and we decided to saddle her outside," said Attfield.
Battling to take the lead was part of Attfield and Stein's plan of attack.
"She's a very competitive filly and we talked about how the race might come up and it virtually went the way we worked it out," said Attfield. "We just let her run her race because that's what she likes to do and when that gray filly (Hot and Spicy) came to her she just dug back in again. She's a tough little filly."
Unspurned banked $150,000 in victory while improving her record to 3-1-1 from seven starts.

Tucci Stables' Starless Night remained undefeated with a dominant front running effort in Sunday's $150,000 Shady Well Stakes, at Woodbine.
Trained by Nick Gonzalez, the bay daughter of Grand Slam-Victory Romance arrived at the 5 1/2-furlong sprint for Ontario-bred juvenile fillies off an impressive maiden win on June 28.
With Eurico Rosa da Silva in the irons, Starless Night set splits of :21.92 and :45.24 with Eff Bee Eye and Brooklynsway keeping close watch.  Starless Night opened up at the top of the lane and sprinted home a comfortable 2 1/2-length winner over a wide rallying Dixie Twist. Starless Night covered 5 1/2-furlongs in 1:04.67.
Da Silva was content to show the way as Starless Night earned her first added-money score.
"When she broke, I wanted to see how the speed was in the race and she took over very easy," said da Silva. "From there on I just dominated the pace. She ran very strong the whole way."
The victory marked the third win from three starters on the card for the Tucci Stables, all trained by Gonzalez.
"It's one of those dream days," said Gonzalez. "That's why you get up at quarter after three every morning and make your way to the racetrack so you can have a day like this."
Starless Night banked $90,000 in victory, while maintaining a perfect record through two starts.
She paid $6.40, $3.50 and $2.40, combining with Dixie Twist ($4.80, $3.40) for a $33.90 (4-7) exactor.  A 4-7-2 (Brooklynsway, $3.40) triactor was worth $140.40, while a $1 Superfecta [4-7-2-1 (Eff Bee Eye)] came back $136.50.
Unspurned Paladin Bay Hot and Spicy Dixie Twist Starless Night Justin Stein Roger L. Attfield Eurico Rosa Da Silva Woodbine