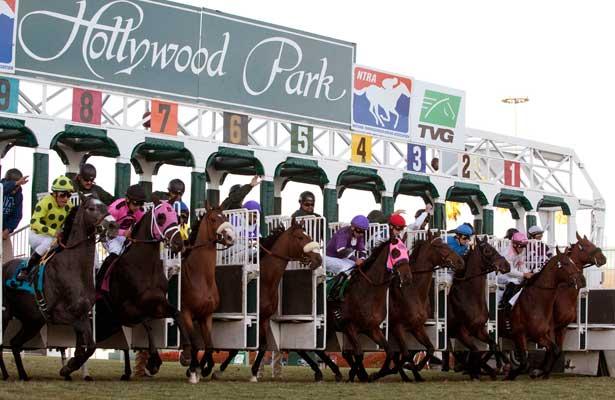 Hall of Fame jockey Mike Smith made the most of his one mount Thursday at Betfair Hollywood Park, winning the $54,250 feature with Uno Dos Adios.

The 7-2 fourth choice in a field of six 3-year-olds, the newly-blinkered gelding finished strongly to prevail by a half-length over Little Jerry.

Trained by Bill Spawr for a partnership that includes Tom Acker, Lori Allen, Jon Lindo and Beauchamp, Smith and Whitney, LLC, Uno Dos Adios, a son of City Zip, completed the 1 1/16 miles on turf in 1:41.50. The victory was the second in five starts for the Kentucky bred, who is out of the Java Gold mare Gowestforgold.

Reserved off the pace by Smith while 2-1 favorite Unbridled Giant set the pace from his inside post, Uno Dos Adios circled widest of all to win for the second time in four races on grass.

Returning to turf after finishing fourth in a $54,457 allowance May 30 over Cushion Track, Little Jerry wound up a head in front of Horizon Sky. He returned $4 and $3 while the show price on Horizon Sky, who has finished third in all five of his starts in the United States, was $2.60.

Unbridled Giant, Democrat Duck and Jovita’s Tuffy, who was pulled up in the stretch by jockey Julien Leparoux, completed the order of finish.

Jockey Rafael Bejarano won twice Thursday, enabling him to tie Joe Talamo atop the rider standings. With 11 days remaining in the Spring/Summer meet, Bejarano, the defending champion, and Talamo both have 41 victories. Edwin Maldonado, who also doubled Thursday and titlist at the 2012 Autumn meet, is next with 36 wins.