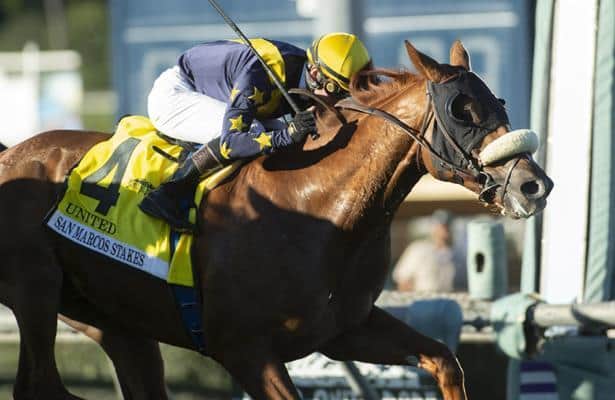 As trainer Richard Mandella was preparing Omaha Beach for last month’s Pegasus World Cup (G1), the Hall of Famer made mention that during his 40-plus-year career, as one big horse appeared on his or her way out, “another good one would pop up.”

It appears to have happened again after United, second in the Breeders’ Cup Turf to Bricks and Mortar, proved that was no fluke on Saturday when becoming a graded winner of Santa Anita Park's San Marcos Stakes (G2).

Away as the 4-5 favorite, the gelded 5-year-old son of Giant’s Causeway never ran too far from the pace, prevailing by 3/4 of a length under jockey Flavien Prat. Alex Solis II, who works with ownership group LNJ Foxwoods, called it the “perfect prep for Dubai,” presumably the 1 1/2-mile Dubai Sheema Classic (G1) on March 28.

United put in his Breeders’ Cup effort going 1 1/2 miles and also finished as a runner-up at the distance in Del Mar’s Hollywood Turf Cup (G2). The San Marcos ran at 10 furlongs.

“A mile and a quarter is not really his thing,” Solis said. “He’s probably better at a mile and a half. He’s just one pace; he stays.

“…He doesn’t quicken, if you look at his fractions he can finish in twenty three and four, twenty three and three — that’s as fast as it’s going to get. So at mile and a half, that works, but a mile and quarter they can quicken a little bit.”

Brought along slowly, United first tried stakes company last May, finishing second in Santa Anita’s Charles Whittingham (G2), and in September filled out the board in the John Henry Turf Championship (G2) to earn his try at the Breeders’ Cup.

On the upswing, United appeared to unlock more of his potential Saturday when jockey Flavien Prat allowed him to run freely near the lead, as opposed to covered up like in the Dec. 1 Hollywood Turf Cup.

“He’s got a big, lumbering stride and you don’t want to get in the way of it,” Mandella said. “We just let him cruise along and that worked out well.”

The Dubai Sheema Classic carries a $6 million purse, and United’s connections can expect to tangle with a truly international field. The race’s last three winners were all owned by Godolphin, with Old Persian, another eventual Breeders’ Cup Turf contender, the 2019 winner.

Runners from the U.S. have never won a turf race on Dubai World Cup night, though Mandella did saddle The Tin Man to a second-place finish in the 2006 Dubai Sheema Classic. He understands the waters will get much deeper for United on Dubai's biggest night.

"He's not so great that he's got them over a barrel, but he's a hard trier and is maybe getting better as we go," Mandella said.

Jockey Club gets OK to weigh in on Baffert/NYRA case
The Jockey Club has received permission to file an...

Prospect Watch: 6 new juveniles to follow at Belmont, Churchill
The final Saturday in June brings a pair of exciti...