United the one to beat in John Henry Turf Championship 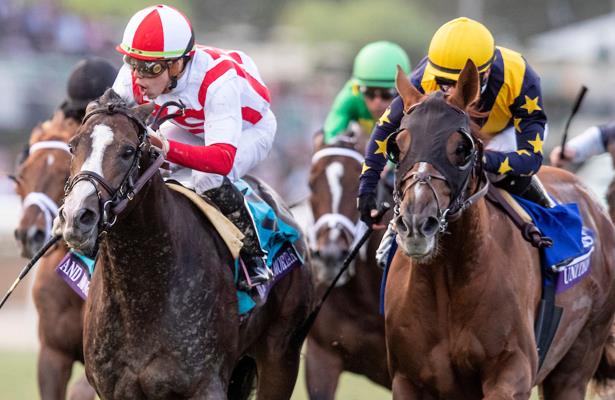 A winner of three out of his last four starts and no worse than third in his last nine, Richard Mandella’s classy United heads up a field of eight 3-year-olds and up going a mile and one quarter in Saturday’s Grade 2, $200,000 John Henry Turf Championship.

Most recently second, beaten a diminishing head at 3-5 in the Grade II Del Mar Handicap, United will again use the John Henry as a springboard to the Grade I, mile and one half Breeders’ Cup Turf at Keeneland, a race in which he was a close second to eventual Horse of the Year Bricks and Mortar last year at Santa Anita.

The Richard Baltas-trained Next Shares, a late running Grade I stakes winner, BG Stables’ Originaire, who charged from far back to be a close third in the Del Mar Handicap and fellow Irish-bred Oscar Dominguez, a close fifth in the same race, lend considerable depth to the John Henry field.

The John Henry is named in honor of the legendary gelding who garnered seven Eclipse Awards and was voted America’s Horse of the Year in 1981 and 1984.  A Kentucky-bred gelding by Ole Bob Bowers, John Henry was trained by Hall of Famer Ron McAnally and was retired at age nine in 1984.

Third in last year’s John Henry, this 5-year-old Giant’s Causeway gelding was subsequently a massive second, beaten a head by Bricks and Mortar at odds of 51-1 in the 2019 Breeders’ Cup Turf, a race that he’s once again prepping for.  Although he was flying at the finish of the Aug. 22 Del Mar Handicap, the winner, Red King, had made an early run and was able to just prevail.  A winner of three out of his four starts this year, United is in top form with an overall mark of 15-6-4-1 and earnings of $1,293,549.

Back from Kentucky following a pair of unplaced starts in one mile turf stakes, including a 10th place finish two races back in the Grade I Makers Mark Mile at Keeneland July 10, Next Shares is a classy 7-year-old gelding that would appreciate a fast early pace.  A solid second, beaten 2 ¼ lengths three starts back in the Grade I Shoemaker Mile (turf) here on May 25, he rallied well to be third, beaten a neck four starts back in the Grade 1 Frank E. Kilroe Mile (turf) on March 7.  Although winless in five starts this year and “o-fer” in two tries at the mile and one quarter distance, Next Shares will hope to rebound on his home ground and will be ridden for the first time by top eastern rider Luis Saez.  The leading money earner in the field with $1,808,571, he’ll be making his 35th career start.

In what will be his fourth consecutive confrontation with United, this 4-year-old Irish-bred colt rates a legitimate upset chance.  Most recently a fast finishing third, beaten a half length by United in the Del Mar Handicap, he was much closer to the pace in both the Grade II Eddie Read on July 26 and the Grade 2 Charles Whittingham Stakes here on May 23, races in which he was beaten 2 ¼ lengths and a half length by United, respectively. With Abel Cedillo set to ride him back for the second time, it would seem that Originaire’s best chance for victory would be if he could again lag far off of a fast early pace.

Another deep closer, “Oscar” was most recently a fast finishing fifth from far off the pace in the Del Mar Handicap Aug. 22, this 7-year-old Irish-bred gelding is winless in four graded starts this year, with his last win coming five races back in the Grade II, mile and one half Hollywood Turf Cup on Dec. 1, 2019.  A winner of six out of his 41 career starts, he’ll be ridden for the first time Jose Valdivia, Jr.