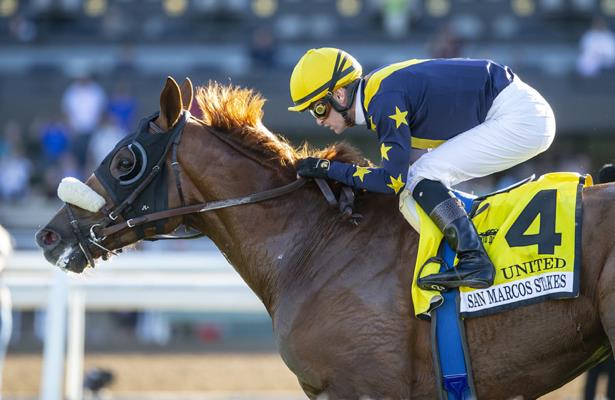 United, third by a length and three quarters as the 2-1 favorite in last year’s John Henry Stakes, is out to make amends in this year’s Grade 2 turf marathon on Saturday.

The 5-year-old gelded son of Giant’s Causeway was second by a head as the odds-on favorite in the Grade II Del Mar Handicap on Aug. 22.

LNJ Foxwoods is the nom de course of owners Larry, Nanci and Jaime Roth, a parents-daughter team that jumped into Thoroughbred ownership in 2012. Larry made his fortune as a principle of eyewear company Marchon and Jaime runs the family stable.

Mandella was weighing options for turf sprint specialist Jolie Olimpica, winner of the Monrovia (Grade 2) and the Las Cienegas (G3), each at 5 1/2 furlongs on grass. The 4-year-old Brazilian-bred filly was second twice, however, when stretching out on turf in the Grade II Buena Vista at a mile and the Grade I Jenny Wiley at 1 1/16 miles.

“She came down with a fever recently, so we have no plans for her next race at this time,” Mandella said of the daughter of Drosselmeyer owned by Rick Porter’s Fox Hill Farms. “She’s just starting back to the track.”

Mandella entered Amuse in Friday’s Chillingworth Stakes. The 5-year-old daughter of Medaglia d’Oro was second in the Rancho Bernardo Stakes (G3) at Del Mar on Aug. 21 under Drayden Van Dyke, who retains the mount.