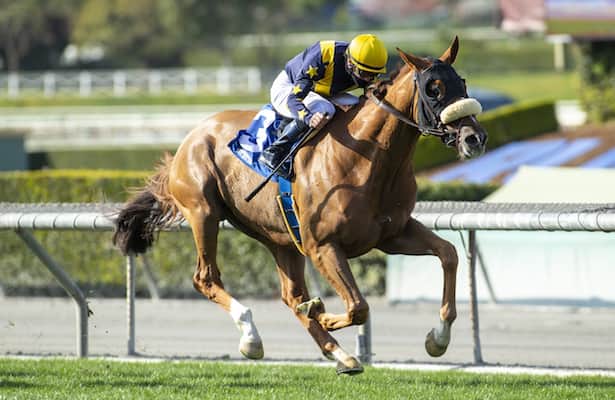 Idle roughly five months since running a disappointing eighth in the Breeders’ Cup Turf, Richard Mandella’s classy turf star United came back running on Saturday at Santa Anita, as he stalked the early pace and motored to an emphatic three quarter length win in the Grade 3, $100,000 San Luis Rey Stakes.

Ridden by Flavien Prat, who notched his fourth win of the day, United, a 6-year-old gelding by Giant’s Causeway, got a mile and one half on turf in 2:25.51.

With speedy Acclimate going to the front as expected in the run down the hillside turf, Prat was attentive to the pace and tracked the leader while applying mild pressure to the far turn, where he took over a quarter mile out and outran second choice Masteroffoxhounds from the top of the lane prior to holding off a late run from Say the Word.

“Hat’s off to Mr. Mandella, he had him ready to run a mile and one half today,” said Prat, who has now guided him to five graded stakes wins.  “He was traveling well the whole way and he responded well when I asked him to go.  My horse likes to be in the race and he likes it when there is a good pace.  I wanted to stay close to Acclimate, I didn’t want him to get too easy of a lead.

“Like I say, we were traveling well and at the three eighths pole, I was in control.  He likes the turf courses out here and with the Breeders’ Cup at Del Mar, that’s good.  Hoping to have a good year.”

“It’s always nice to be home,” said Mandella.  “He’s won very nicely at Del Mar also, although we like The Great Race Place.”