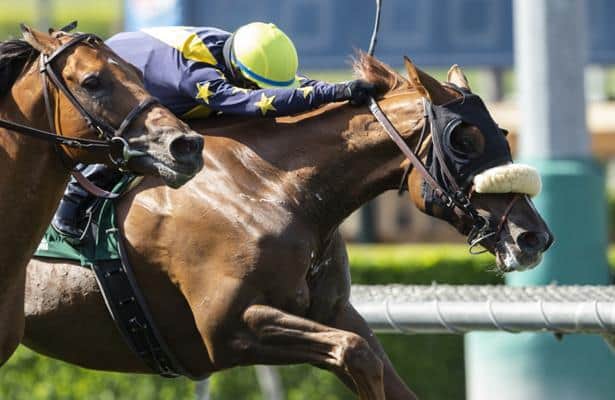 “We’ll look it over and come up with a game plan,” Mandella said.

United improved to 2-for-2 on the season when pressing the pace and then holding off favored Rockemperor by a nose on the wire in the 1 1/4-mile Whittingham. The gelding, who emerged on to national prominence when nearly pulling a 51-1 shocker in the Breeders’ Cup Turf, had previously kicked off his 5-year-old campaign with a win in the Feb. 1 San Marcos Stakes (G2) at Santa Anita.

The Elkhorn may also include leading turf horse Zulu Alpha, among others.

Mandella also touched on his other stakes winner from this past holiday weekend at Santa Anita, Jolie Olimpica, who nearly broke her own course record when winning the Monrovia Stakes (G2) going 5 1/2 furlongs. The Hall of Fame trainer continues to be impressed with the Brazilian-bred, who has made three starts since arriving at Santa Anita.

“That’s a really good filly, gifted with a lot of speed, but I think she’s going to be able to stretch that out to a mile or a little further,” Mandella told Byk.

Jolie Olimpica won the Las Cienegas (G3) going 5 1/2 furlongs at Santa Anita in her first start for Mandella and owner Fox Hill Farms on Jan. 11. Stretched out to a mile Feb. 22 Buena Vista (G2), she had the lead in deep stretch before getting nailed in the shadow of the wire by Keeper Ofthe Stars, who went on to win Monday's Gamely Stakes (G1) later in the card.

Mandella said he planned to keep Jolie Olimpica around two turns, but the break in racing due to COVID-19 altered those plans.

“She was a little immature for American [racing] when I stretched her out the last time and she got caught on the wire,” Mandella said on At the Races.” We had her pointed to a race here at a mile before the break and I think she would have done very well. But then we had a lot of time to freshen again, so I just went back to where we started and it worked out pretty well."

Mandella added the daughter of Drosselmeyer would be stretched out again “at some point.”

Jolie Olimpica was undefeated in three starts in her native Brazil, including a Grade 1, before being purchased privately by Rick Porter’s Fox Hill Farms.