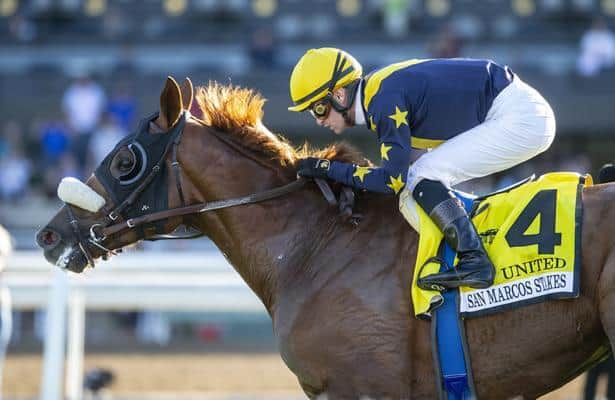 Richard Mandella’s classy multiple stakes winning United, idle since early November, will square off with Richard Baltas’ sharp recent winner Masteroffoxhounds, as they head a field of five older horses going a mile and one half on turf in Saturday’s Grade 3, $100,000 San Luis Rey Stakes at Santa Anita.

A winner of four out of nine Santa Anita turf starts, United has been idle since running a disappointing eighth in the Grade 1 Breeders’ Cup Turf on Nov. 7 at Keeneland—a race in which he finished second, beaten a head at Santa Anita on Nov. 2, 2019.

A 6-year-old gelding by Giant’s Causeway, United enjoyed a terrific year in 2020, winning four out of his six starts, all in graded stakes, and finishing a close second in another, the Grade 2 Del Mar Handicap three starts back on Aug. 22.

A gate to wire winner of the Grade 2 John Henry Turf Championship at a mile and one quarter here two starts back on Sept. 26, United’s lone “misfire” came in the Breeders’ Cup Turf, a race in which he pressed the early pace but tired to be beaten 9 ¾ lengths.

Owned by LNJ Foxwoods, United will be ridden by Flavien Prat, who’s been aboard for his last 11 starts, winning five of them.  With two second place finishes in three tries at 1 ½ miles on turf, United is easily the leading money earner in the field with $1,453,549 from an overall mark of 17-7-4-1.

A 4-year-old Kentucky-bred colt by War Front, Masteroffoxhounds made his first six starts in Ireland, winning one of them.  A non-threatening seventh in his U.S. debut going one mile on turf three starts back on Nov. 7, he’s shown rapid improvement going longer distances for Baltas—airing by 4 ¼ lengths in a 1 3/8 mile turf allowance Nov. 28 at Del Mar and most recently, winning the Grade 2, 1 ¼ mile turf San Marcos Stakes here on Feb. 6 by 1 ¼ lengths.

As is often the case on grass at Santa Anita, trainer Phil D’Amato will be very well represented, in this case, by a pair of horses, Ontario, Canadian-bred Say the Word and California-bred Acclimate.

In his first start for D’Amato, the current Winter/Spring leader with 10 stakes wins, Say the Word, a dedicated deep closer, finished with a flourish two starts back to be third, beaten one length, in the Grade 2 Hollywood Turf Cup going a mile and one half at Del Mar on Nov. 27.  Subsequently 11th going 1 3/16 miles in the Grade 1 Pegasus World Cup Invitational Turf Jan. 23 at Gulfstream Park, he’s worked six times since over Santa Anita’s inner dirt training track, a regimen that has worked well for D’Amato this winter.

A 6-year-old gelding by More Than Ready that is owned by his breeder, Sam-Son Farm and Agave Racing Stable, Say the Word’s chances would be greatly enhanced by a lively pace.  A Group 1 winner at a mile and one half on turf at Woodbine Race Course, he’s got an overall mark of 27-5-2-5, good for earnings of $469,292. With leading rider Flavien Prat opting to stick with United, Say the Word will be ridden for the first time by Mike Smith.

D’Amato will hope to “have ’em surrounded” in the San Luis Rey, as his 7-year-old gelding Acclimate, will likely go to the front and try to take the field as far as he can under Tyler Baze.  Bet to the 6-5 favorite in the Grade 2 San Marcos on Feb. 6, this California-bred son of Acclamation showed the way until collared by Masteroffoxhounds in a 1 ¼ length defeat—which was his third start off a one year absence.

With four wins, two seconds and as many thirds from 13 tries over the Santa Anita turf, Acclimate’s connections will hope a hillside start may bolster their front-running chances on Saturday.  Owned by the Ellwood Johnston Trust, Timmy Time Racing, LLC and Ken Tevelde, Acclimate, who was bred in-part by Old English Rancho, has earnings of $439,872.