Uni begins 2018 campaign with sharp victory in Plenty of Grace 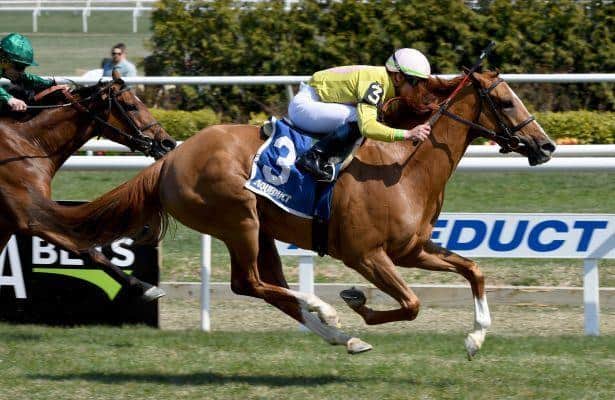 Photo: Rob Mauhar/NYRA
Uni capitalized on a drop in class and cutback in distance, rallying in the stretch to post a one-length score in the fourth running of the $100,000 Plenty of Grace, carded as Race 3, for older fillies and mares at one mile on the turf Saturday at Aqueduct Racetrack.

Owned by Michael Dubb, Head of Plains Partners, Robert LaPenta and Bethlehem Stables, Uni stayed off Stallion Heiress' fractions of 24.40 for the quarter-mile and 47.92 for the half on the firm outer turf. Out of the final turn, jockey Irad Ortiz, Jr. set down the English-bred, overtaking Stallion Heiress from the outside to hit the wire in 1:33.42, breaking the previous course record of 1:35.15 set by Fire Away on April 8.
Uni won for the second time in three starts for trainer Chad Brown, who saw his entries finish 1-2 when Fifty Five rallied from the rail to outkick Stallion Heiress for second. Brown won the Plenty of Grace for the third straight year after Mrs McDougal in 2016 and Light in Paris last year.
Uni has finished on the board in four of her five starts since arriving from France in July, with Ortiz in the irons for every one of those starts, including a win in the Grade 2 Sands Point on September 16 at Belmont Park.
"He [Brown] knows his horses. He told me last year, she wasn't always breaking good, but today she broke good and I got a perfect trip," Ortiz said. "It's her first time coming back for the year, so he said to break wherever she's comfortable and go from there. She was ready. They have a great team, the assistants, everybody. They did a good job with her. She came back good. She showed today that she can do it and she did it the right way. She was off for a long time and she showed up."
The 4-year-old More Than Ready filly put in a stellar effort coming off a six-month layoff. After working at Palm Meadows Training Center in Boynton Beach, Florida, she earned a return trip to the winner's circle in her first race since running fourth in the Grade 1 Queen Elizabeth II Challenge Cup on October 14 at Keeneland.

"She just shipped up to me about a week ago, so all the legwork was done in Florida and they did a great job and she showed it here today," said Whit Beckman, assistant to Brown. "We didn't really have any instructions coming into the race, just to let her break, get comfortable, leaving it up to Irad and he did the right thing. We're happy with the result and looking forward to what she can do the rest of the year as well."

Fifty Five, a New York-bred, finished in the money for the 10th time in 11 career starts. The 4-year-old Get Stormy filly was also making her first start of the year.

Stallion Heiress, My Impression and Not Taken completed the order of finish.

Brown and Ortiz teamed up for three wins on the turf on the day, with Battle of Blenheim ($4.60) in Race 5 and Reversethedecision ($4.30) in the card's finale in Race 9.

In the day's second stakes in Race 8, Ten Strike Racing's Black Stetson sprung an 18-1 upset in the inaugural running of the $100,000 Bridgetown for 3-year-olds at six furlongs on the outer turf.

Black Stetson broke with ease under Junior Alvarado and quickly assumed control, taking the field of seven through an opening quarter-mile in 22.03 and a half in 44.56. Smooth B and Nootka Sound, perched to Black Stetson's outside through the early going, each made a bid for the lead as the pacesetter turned for home. Black Stetson dug in through the stretch, fending off the two-pronged challenge to hold on by a half-length over the Wesley Ward-trained Nootka Sound, the lone filly in the field, in a blanket finish.

Coltandmississippi and Ambassador Jim closed late to finish third and fourth, respectively. All Systems Go, Smooth B, and Barbarossa completed the order of finish.

"I was talking to Kendrick [Carmouche] three days ago and he said, 'you'll like him, he's a fighter,'" said Alvarado. "I had that in the back of my mind. He broke good, I just wanted to be sure to put him on the lead, where he can use his speed and be comfortable."