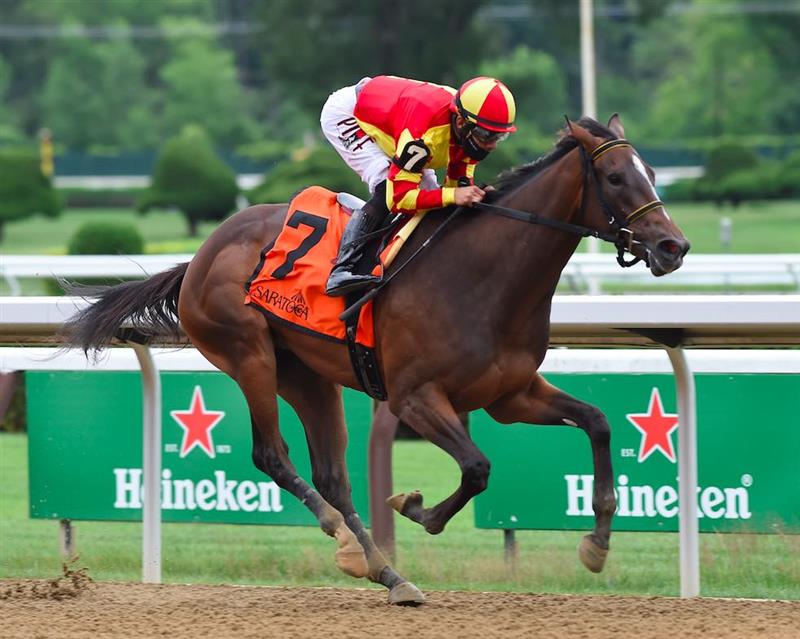 In besting a seven-horse field of juvenile fillies going six furlongs, Dayoutoftheoffice improved to 2-for-2 to start her career following her 4 3/4-length triumph in a 4 ½-furlong maiden race on May 14 at Gulfstream Park.

The Into Mischief filly gave trainer and co-owner Timothy Hamm his first graded stakes win since 2009 and his first stakes win ever at Saratoga. Her effort, which saw her win handily under jockey Junior Alvarado, earned her an 82 Beyer Speed Figure.

"She came out of the race great and ate everything up last night and this morning," Hamm said. "She doesn't look any worse for wear. It's really encouraging."

By stretching out, and showing the potential for even further distance, Hamm said Dayoutoftheoffice increased her potential options for future races.

"It's the kind of read we had on her training up to her first race. We thought the 4 ½ might be too short for her," he said. "But she got that down, and I was optimistic she wanted to run further than that. I believe if she stretches out, she'll be able to handle that as well. If you don't look good there, it closes a lot of doors. But if you win, you have options open, and you just want to lay out a good schedule now and get her where she needs to be."

That schedule could include another start at Saratoga, where Hamm said she could go to either the Grade 2, $150,000 Adirondack at 6 ½ furlongs on August 12 or wait for the meet's closing weekend and the Grade 1, $250,000 Spinaway at seven furlongs on September 6.

"The Adirondack is a possibility and the Spinaway is possible. I don't know if we would do both or [just] one of the two. But we'll probably run her up back there at least once."

Bred in Kentucky by Siena Farms, which also co-owns Dayoutoftheoffice with Hamm, the dark bay filly gave her conditioner his third career graded stakes win and first since Afternoon Stroll won the 2009 Grade 3 Appalachian at Keeneland.

"It's definitely special," Hamm said. "We sell a lot of our young horses early. We've had a training center in Ocala [Florida] since the mid-90s. We broke 75 2-year-olds there this year. Sky Diva, who was Sky Mesa's first Grade 1-winner, came from us. So, we sell a lot of good, young horses off the farm. Horses off that farm have won more than 150 stakes, but a lot of times, we don't have them when they win graded stakes. We sell them prior.

"It's an awesome moment. It's a good spot to be in [the winner's circle], that's for sure," he added.

Hamm, who won his first race as a trainer in 1996, has amassed 1,305 career victories. And finally, a Saratoga winner.