9-0 Baaeed is part of Breeders’ Cup qualifying races in U.K. 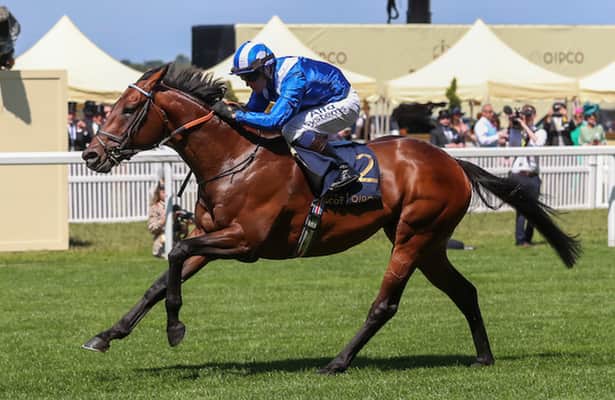 Want to watch elite racehorses in action this week? Then you’re advised to check out the Group 1 prizes on tap at York in England, where Baaeed is the headline attraction.

Thus far, Baaeed’s brilliance has been boundless. A definitive measure of his ability has yet to be produced, because the fleet 4-year-old has never tasted defeat. Nine starts. Nine victories. Five consecutive Group 1 wins.

Blowout victories haven’t been a hallmark of Baaeed’s style. The four-year-old son of Sea the Stars prefers a casual approach, doing just enough to win comfortably. His first top-level success came at the expense of 2020 Breeders’ Cup Mile winner Order of Australia in the Prix du Moulin de Longchamp (G1) last September, and since then Baaeed has rattled off victories in the Queen Elizabeth II (G1), Lockinge (G1), Queen Anne (G1), and Sussex (G1).

The list of horses Baaeed has conquered goes on and on; most recently, he defeated 2021 Breeders’ Cup Juvenile Turf winner Modern Games by 1 3/4 lengths in the Sussex. Having nabbed a sizable percentage of Europe’s best turf miles open to older horses, Baaeed will tackle a new test – a new distance – in Wednesday’s prestigious Juddmonte International (G1) at York.

The Juddmonte International highlights a fantastic week of racing at York featuring a trio of “win and you’re in” qualifiers for the 2022 Breeders’ Cup at Keeneland. Held over 1 5/16 miles, it offers a qualifying berth to the Breeders’ Cup Classic.

Having run exclusively in one-mile races to date, Baaeed is unproven over the journey of the Juddmonte. But if he can stretch his miler speed over a middle-distance trip – and there’s no reason to think he can’t – he’ll have an abundance of options for the remainder of 2022.

However, connections have pointed Baaeed toward the Irish Champion (G1) at Leopardstown and either the Queen Elizabeth II (G1) going one mile or the Champion Stakes (G1) going 1 1/4 miles on British Champions Day at Ascot. After that, Baaeed is expected to go to stud.

To win the Juddmonte, Baaeed will have to reckon with Mishriff. The defending Juddmonte International winner has lost his last four starts, but one of those was a neck defeat in the Eclipse (G1) racing 1 1/4 miles at Sandown two starts back.

Mishriff was most recently beaten to third place in the King George VI and Queen Elizabeth (G1) over 1 1/2 miles at Ascot, but he broke belatedly and conceded a lot of ground at the start. He’s eligible to rebound while cutting back in distance, and since Mishriff is proven on dirt with a victory in the 2021 Saudi Cup (G1) under his belt, it’s hardly a stretch to think Mishriff could target the Breeders’ Cup Classic if he springs the upset at York.

The Juddmonte International is the highlight of the week at York, but Thursday’s Darley Yorkshire Oaks (G1) has to rank a close second. Final entries for this 1 1/2-mile Breeders’ Cup Filly & Mare Turf qualifier hadn’t been drawn at the time of writing, but early entries indicate we’re in for an epic race.

The most accomplished of the potential entrants is Alpinista, a five-year-old mare riding a six-race win streak. She flew a bit under the radar in Germany last season while rattling off victories against males in the Grosser Preis von Berlin (G1), Preis von Europa (G1), and Grosser Preis von Bayern (G1), but she successfully carried her form outside of Germany when kicking off 2022 with a victory in the Grand Prix de Saint-Cloud (G1) in France.

The Grand Prix de Saint-Cloud was contested over 1 1/2 miles against males, so the Yorkshire Oaks should theoretically be an easier spot for Aplinista. We say theoretically because the Yorkshire Oaks has the potential to come up very deep. Magical Lagoon rose to prominence with a victory in the 1 1/2-mile Irish Oaks (G1) last month, and Tuesday was a determined winner of the historic Cazoo Oaks (G1) prior to finishing fourth against males in the Irish Derby (G1). And we can’t overlook the red-hot four-year-old La Petite Coco, whose four-race win streak includes a victory in the 1 1/4-mile Pretty Polly (G1) to kick off 2022.

Rounding out the “win and you’re in” action at York is Friday’s Coolmore Nunthorpe (G1), a steppingstone toward the Breeders’ Cup Turf Sprint. It’s too early to say what the final field will look like, but early betting has highlighted Royal Aclaim and The Platinum Queen as the key contenders.

Royal Aclaim is undefeated in three starts and scored a victory over the course and distance of the Nunthorpe when trouncing the John Smith’s City Walls last month. The Platinum Queen likewise handled this configuration when dominating a minor five-furlong sprint on July 8, after which she trounced another minor five-furlong dash on July 27 at Goodwood by four lengths.

The intrigue with The Platinum Queen is the fact she’s a two-year-old taking on older horses, which means she’ll tote only 112 pounds – 22 pounds fewer than Royal Aclaim, who has been assigned 134. Whether the weight difference can send The Platinum Queen to the winner’s circle remains to be seen, but it’s worth noting the Breeders’ Cup Turf Sprint isn’t open to juveniles, so The Platinum Queen won’t be eligible to use her “Win and You’re In” berth if she prevails at York.

We should also mention that recent Prix Maurice de Gheest (G1) winner Highfield Princess is among the early entries in the Nunthorpe. She would be running back on just 12 days of rest, but scoring back-to-back Group 1 wins sprinting would establish the five-year-old mare among the very best sprinters in Europe.

One final note on the international front – Sunday brings the running of the Prix Morny (G1) at Deauville in France, a “Win and You’re In” qualifier to the Breeders’ Cup Juvenile Turf Sprint. The early entries are packed with promising names, including the Phoenix (G1) runner-up Persian Force and a quartet of candidates from the powerful stable of trainer Aidan O’Brien: Blackbeard, Little Big Bear, Aesop’s Fables, and Meditate.