Undefeated Astute sizzles in bullet work; date in Starlet next 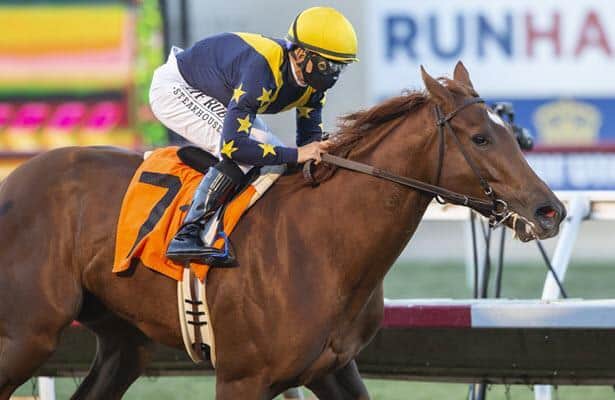 Astute had enough class to win her debut on turf, but the more she runs and works, the more evident it is that dirt is her best game.

Richard Mandella's 2-year-old daughter of Speightstown broke her maiden by a neck on the grass on Oct. 12 and quickly jumped into stakes company on Nov. 14 with an authoritative 7 1/2 length victory in Del Mar's Desi Arnaz on the dirt under Mike Smith.

She has proceeded to work like a filly with serious potential, blazing four-furlongs in 46.00 Friday morning at Del Mar.

She will be given her first opportunity to show that promise around two turns in next Saturday's Starlet Stakes (G1) at Los Alamitos where she will square off against Bob Baffert's Princess Noor.

Princess Noor lived up to her $1.35 million price tag in her first three starts, including romping wins in the Chandelier and Del Mar Debutante.

She finished a disappointing fifth in the Breeders' Cup Juvenile Fillies, leading many to justifiably question the strength of this year's 2-year-old filly division in California.

Astute is among the next wave of fillies who will try to provide strength and depth to the division, but LNJ Foxwood's filly may very well prove to be the best of the West Coast crop.