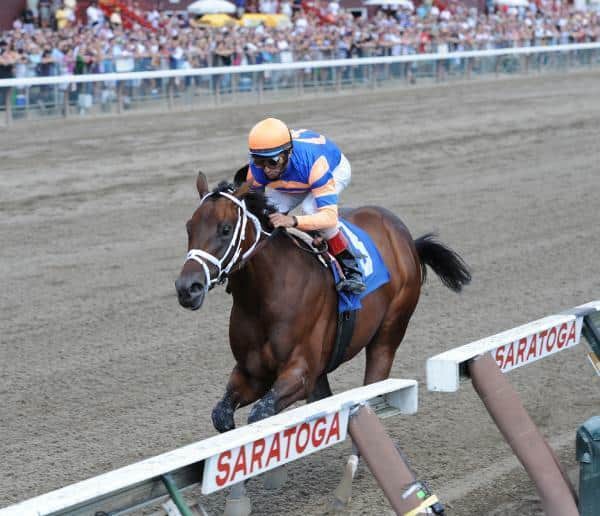 Although Mike Repole is currently the leading owner in New York in 2010, he’ll be the first to tell you there is something missing on his resume –

in 26 tries, he has yet to win a graded stakes race.

Saturday, he’s hoping that will change when his aptly-named Uncle Mo steps onto Belmont Park’s main track for the 140th running of the Grade 1, $300,000 Champagne Stakes. The one-mile race is not only one of the most prestigious races for 2-year-olds in the nation, but will give the winner an automatic berth into the Breeders’ Cup Juvenile at Churchill Downs on November 6 as part of the Breeders’ Cup Challenge Series.

Uncle Mo – sports slang for momentum – burst onto the scene on August 28 at Saratoga Race Course when, sent off as the 4-5 favorite in his first start for trainer Todd Pletcher, he galloped to a 14 ¼-length victory that earned him a 102 Beyer Speed Figure, tying him with Grade 1 Three Chimneys Hopeful winner Boys At Tosconova for the highest among 2-year-olds this year.

The performance was enough to make him the heavy 1-4 favorite among the seven juveniles entered in the Champagne as he stretches out from six furlongs in his second start.

“His gallop out is as impressive as his works ... just to watch him run alongside another horse and then gallop out a furlong or two afterwards and go up by 10 or 15 lengths is pretty exciting.”

John Velazquez is back aboard Uncle Mo, who drew post position 3.

“As I’ve said before, it’s not often you have a maiden 2-year-old winner going into a Grade 1 and you’re hoping he’ll run as well as he did in his maiden race,” said Pletcher of Uncle Mo. “But he’s continued to do well and we’re very excited about running him.”

Pletcher also entered Repole’s Hopeful runner-up, Stay Thirsty, as part of an entry with Uncle Mo in the Champagne as an “insurance policy,” but he is unlikely to start. Javier Castellano was named to ride from post position 5.

Returning from the Hopeful is the Mark Hennig-trained Settle for Medal, who finished fourth and who will get a rider change to Jose Lezcano. Third to Boys At Tosconova in his debut at Belmont on July 2, the Medallist colt rallied from far back to break his maiden at Saratoga on July 31, but was not a factor in the Hopeful after the pace scenario Hennig had hoped for did not develop.

“The Hopeful really was considerably slower than the filly races that day,” said Hennig. “I’m hoping that with the Champagne being longer, there will be a more realistic pace scenario. We’re up against it a little bit, but perhaps the big, sweeping turns here will help him, and he had a really nice work the other day [4f, 48.10, October 3].”

At 10-1 on the morning line, Settle for Medal drew post position 2.

Hall of Famer Nick Zito, a five-time winner of the Champagne, most recently with 2007’s Top 2-Year-Old, War Pass, is back for another try with William H. Lawrence’s Meridian Magic. The son of Mineshaft, fifth in his first start at Saratoga on August 21, returned to break his maiden at Delaware Park on September 18 at a mile and 70 yards.

Alex Solis rides Meridian Magic, 20-1 on the morning line, from the rail.

Rick Dutrow, trainer of Boys At Tosconova, is represented in the Champagne by Mountain Town, whom he claimed for owner Paul Pompa for $75,000 out of his last-to-first maiden victory at Saratoga on August 19. The Cape Town colt drew post position 6 under Cornelio Velasquez and was listed at 12-1 on the morning line.

Completing the field are George and Lori Hall’s Brother in Arms, front-running winner of a six-furlong maiden race at Belmont on September 18 and the second choice on the morning line at 5-1, and I’m Steppin’ It Up, most recently third in a one-mile allowance on the turf at Delaware Park on September 4.

What we learned: Proxy one to watch after Lecomte runner-up
When analyzing a race days beforehand, the hard pa...