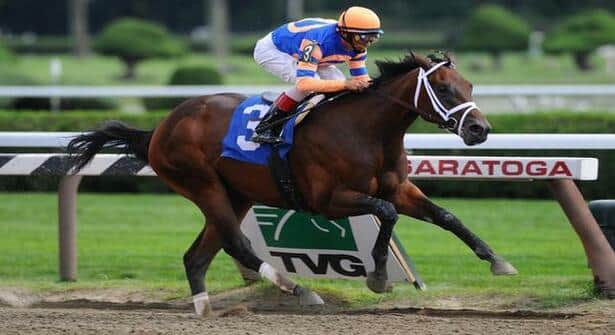 Heavily favored Uncle Mo lived up to expectations Saturday afternoon at Belmont Park with a 4 ¾-length victory in the Grade 1, $300,000 Champagne Stakes that was as swift as it was authoritative.

Sent off as the 1-5 favorite in the field of six, the 2-year-old son of Indian Charlie dueled for the early lead with longshot I’m Steppin’ It Up through opening fractions of 22.41 and 45.92, and began edging clear after going three-quarters in 1:10.47. Kept to task through the stretch by jockey John Velazquez, Uncle Mo easily opened up on his five rivals, hitting the wire in 1:34.51 for the mile, which tied with Seattle Slew for the second-fastest Champagne at the distance, just  a fifth of a second slower than Devil’s Bag’s 1983 stakes record of 1:34 1/5.

“He’s obviously a very fast and talented horse and it looked as if he was doing it easily,” said trainer Todd Pletcher of the Repole Stable color-bearer, who came into the Champagne off one race – a 14 ¼-length maiden victory at Saratoga Race Course on August 28. “In a perfect world you’d be going the first half in :48, in front three lengths, down the backside. We anticipated these solid fractions; the track was lively today. He’s just such a talented horse; he’s able to do things other horses can’t do.”

Finishing second was Mountain Town, who was 9 ¾ lengths clear of I’m Stepping It Up. Settle for Medal, Meridian Magic, and Brother in Arms completed the order of finish. Uncle Mo’s stablemate, Stay Thirsty, was scratched to await a possible start in the Breeders’ Cup Juvenile at Churchill Downs on November 6, a race to which Uncle Mo gained automatic inclusion by virtue of his victory in the Champagne, part of the Breeders’ Cup Challenge Series.

“The Breeders’ Cup Juvenile would be the obvious goal,” said Pletcher, adding: “I don’t see how a horse could start a career more impressively than he has. His maiden was as good as I’ve seen, and then to come back and run 1:34 2/5 in the Champagne is unbelievable. His times have been exceptionally fast; he gets stronger as he goes along.”

The victory was also the first in a graded stakes after 26 tries for Uncle Mo’s owner, Mike Repole, who donned an all-black outfit in an effort to change his luck and who was rewarded with three winners on the day’s card, including Run to Grand Ave. in the first race and Gerard Loves Beer in the fourth.

“It’s been six years as a horse owner, but I’ve been coming here since I was 13, so it’s really been like….28 years and it just feels great,” said Repole, 41. “It’s just surreal right now to have my grandmother, my wife, my parents here. It’s what horse racing is about. It just feels great.”

Pletcher, who won the Champagne in 2006 with Scat Daddy and in 2004 with Proud Accolade, said Uncle Mo would remain at his barn at Belmont Park until October 26, when he would depart for Churchill Downs along with others from the trainer’s Breeders’ Cup contingent.