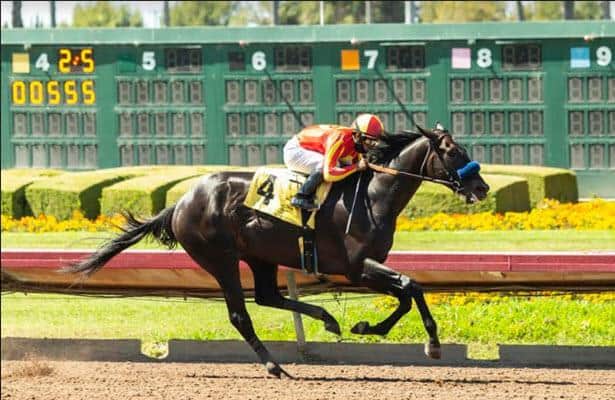 Uncle Chuck improved to 2-for-2 on his young career in capturing Saturday’s Los Alamitos Derby for trainer Bob Baffert.

Ridden by Luis Saez, the Uncle Mo colt owned by Karl Watson, Mike Pegram and Paul Weitman traversed the 1 1/8 miles on a fast track in 1:47.65, taking the lead over Thousand Words with about three furlongs left to race.

The 2-5 favorite in a four-horse “Road to the Kentucky Derby” prep series race, Uncle Chuck won facing winners for the first time. He broke his maiden on June 16 at Santa Anita Park for Baffert, going a mile on the dirt against five other maidens.

UNCLE CHUCK is much the best in the Los Alamitos Derby @LosAlRacing! @luissaezpty on the mount for Trainer Bob Baffert & Owners Pegram, Watson or Weitman.

Uncle Chuck earned 20 points towards a spot in the starting gate in the postponed 2020 Kentucky Derby on Sept. 5.

A $250,000 purchase from the 2018 Keeneland September yearling sale, Uncle Chuck will await Baffert’s next move for the colt, who could be pointed to another Derby points race, possibly the Shared Belief at Del Mar on Aug. 1.

“That was good. At the top of the lane, I thought Thousand Words might get him, but at least he ran better," Baffert said. "We’re just learning more about Uncle Chuck. He’s still pretty green, but he’s got gears. [Saez] was excited about him and I think he’s one of the top riders in the country. He said (Uncle Chuck) is still learning and he’s got a lot of improvement in him.

"He was full of himself when he came back," Baffert added. "It’s exciting. He’s learning quickly and he has brilliance. I was impressed. I think we just saw something pretty special and he’s been special from day one. He’s bred to be any kind.’’