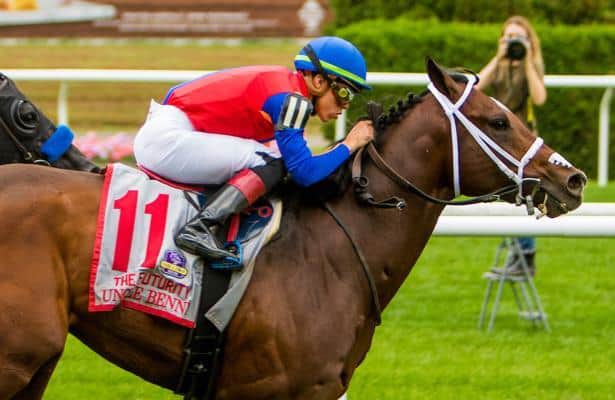 Owned by Beach Haven Thoroughbreds, the bay son of Declaration of War won his first two career starts, breaking his maiden over the main track at Monmouth Park before winning the Futurity over a Widener turf course at Belmont Park labelled good.

He subsequently finished a narrow second in the Breeders' Cup Juvenile Turf to Line of Duty after he was lightly bumped in mid-stretch.

Uncle Benny is out of the Storm Cat broodmare Celebrity Cat, whose granddam Starrer was a multiple Grade 1-winning millionaire.

Bred in Kentucky by Peter Magnier, Uncle Benny was purchased for $185,000 from the Fasig-Tipton Saratoga Select Yearling Sale in August 2017.

The Black Album will cut back in distance from one mile, fresh off a stakes victory in the Charlie Barley at Woodbine.

He was a Group 3-winner in France before making his United States debut in the Breeders' Cup Juvenile Turf, when eighth.

The Black Album did not race again until April, where he was third in the Transylvania (G3) at Keeneland.

Linda Rice owned and trained New York-bred Elektronic proved more than capable against open stakes company last out with a runner-up finish in the Quick Call (G3), and will take another shot at such caliber, leaving from post 2 under Jose Lezcano.

The son of City Zip broke his maiden at second asking over a firm Widener Turf Course at Belmont Park and built on that effort with a victory against Empire State-bred winners over Belmont's inner turf two weeks later.

Workout report: See Knicks Go’s final breeze before Pegasus
In the final timed workout of his career, the like...