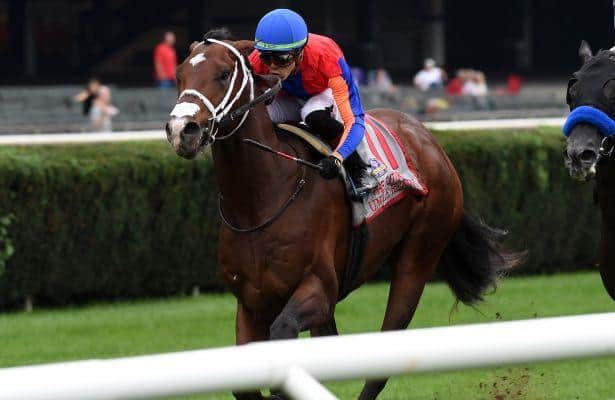 Following a front-running victory on dirt in his debut, Uncle Benny went from last to first to capture the $150,000 Futurity Stakes at Belmont Park Sunday, securing his spot in the first running of the Nov. 2 Breeders’ Cup Juvenile Turf Sprint (G1) at Churchill Downs.

The 2-year-old Declaration of War colt made his first start Aug. 24 at his home track, Monmouth Park. Trained by Jason Servis and owned by Ara Aprahamian, Uncle Benny is now two-for-two.

Servis wasn't worried about the surface switch with Uncle Benny's sire being a multiple Group 1 winner over European turf.

"Around Monmouth time, I told people he was one of my best 2-year-olds," he said, "so we're high on him. We think he's a nice horse, and he looks the part too. He's a big, good-looking horse. He's massive.

Jockey Irad Ortiz Jr. was aboard in the Futurity, where Uncle Benny switched surfaces and stretched out an extra furlong. At the opposite end of the field, Joyful Heart set fractions of 22:46 and 46.30 over a turf course rated “good.” The Wesley Ward-trained filly, Dragic, was the favorite and sat mid-pack.

Uncle Benny pulled ahead by half a length and completed the six furlongs in 1:11.26.

"I'm just so happy for Jason Servis, it's been such a good year for him," Ortiz said. "He's a nice horse. It was the first time I rode him. We had the outside post and he broke a step slow. I didn't want to rush him out of there, he's a baby. They ran away from and I just dropped in. I didn't panic. I waited and when I made the run on the outside, he took off."

Even though the Futurity is a "Win and You're In," Servis hasn't decided which Breeders' Cup route to take.

Uncle Benny was bred in Kentucky by Peter Magnier. Servis signed the $185,000 ticket at the 2017 Fasig-Tipton Saratoga Select Yearling Sale. The bay colt has made back a good portion of that price, earning $104,100 in his two starts.