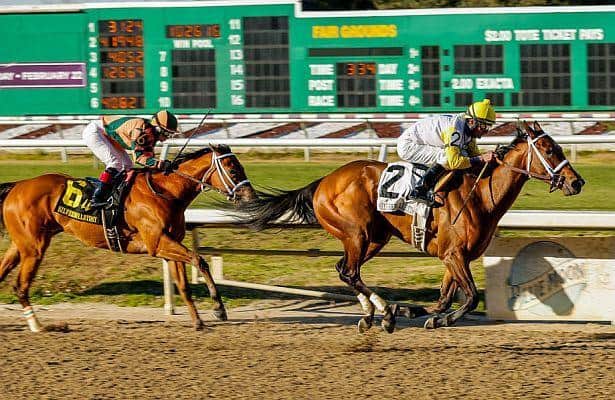 Charles Fipke's Unbridled Forever tuned up for her run in the Grade 1, $600,000 Alabama on Friday, working a crisp five furlongs in 1:00.40 on the main track under exercise rider Pedro Valez.

Trained by Dallas Stewart, the 3-year-old daughter of Unbridled's Song is coming off a second-place finish in the Grade 1 Coaching Club American Oaks, a race in which Stopchargingmaria beat her by five lengths.

"She worked beautiful," Stewart said. "From her last race to now, she has gained weight which is a good sign. She came out of a hard race. It shows that she handled it and handled the race. She's handled the hard training we've given her - some good mile-and-a-half gallops. They have been strong on the end. Today's work was spectacular. It was very comfortable. It was perfect."

Rosie Napravnik will pick up the mount on Unbridled Forever for the Alabama.

Now Unbridled Forever will get an extra furlong for the 1 ¼-mile Alabama on August 16.

"The added distance will benefit her," Stewart said. "She'll probably run the same type of race. She'll be off the pace, strong finish. The extra furlong will probably be the difference."

The top four finishers from the Grade 1 Coaching Club American Oaks are likely to return in the Grade 1, $600,000 Alabama on August 16.

Stopchargingmaria is probable to headline the Alabama field for trainer Todd Pletcher and owner Mike Repole. The dark bay or brown daughter of Tale of the Cat captured the Grade 2 Black-Eyed Susan on the Preakness undercard before taking the CCA Oaks by five lengths in her most recent outing. Pletcher may also be represented by Got Lucky, runner-up in the Grade 2 Gazelle at Aqueduct, and most recently winner of a first-level allowance race at Saratoga.

CCA Oaks runner-up Unbridled Forever is likely to be sent out by trainer Dallas Stewart. Owned by Charles E. Fipke, the bay filly has now placed in three consecutive Grade 1 races but has not entered the winner's circle since a victory in the Silverbulletday on January 18 at the Fair Grounds.

Trainer Bill Mott is probable to saddle the third and fourth-place finishers from the CCA Oaks, Miss Besilu and America, and Fortune Pearl rounds out the list of probables for the Alabama. The Mineshaft filly, trained by Graham Motion, finished third in the Black-Eyed Susan before taking the Grade 2 Delaware Oaks in her latest outing.