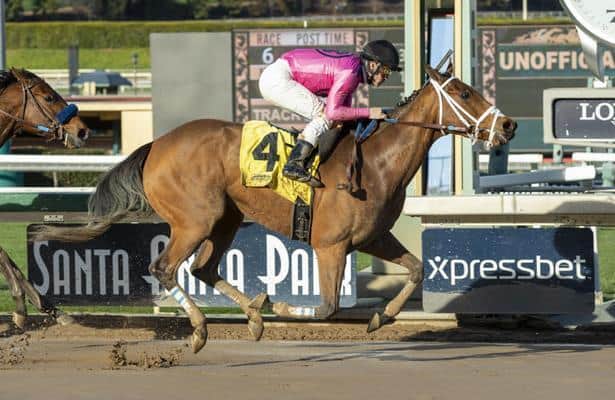 In a race reduced by five scratches to a field of four runners due to a shift in surfaces, Saturday's $100,000 Las Cienegas Stakes at Santa Anita went to favored Belvoir Bay, who stalked the early pace and took command a quarter mile from home en route to an authoritative 1 1/4-length tally under Flavien Prat.

Owned by Gary Barber and trained by Peter Miller, English-bred Belvoir Bay got 6 1/2 furlongs in 1:15.06 over a main track labeled wet fast.

“We had a good trip and I was very confident the whole way,” said Prat. “She made a good move around the turn and she did it pretty easily.”

“She’s just unbelievable,” said Miller. “She can do anything, any distance, up to a mile. Any surface, she’s the kind. I think this may have opened some doors to us in the future, to possibly run on dirt. I’ll talk to Mr. Barber and do what we want to do, but we know she can sprint on the grass, obviously.

“I was a little concerned when Smith (Mike, aboard eventual runner-up Lady Suebee) came up outside my other horse (Painting Corners) like he did heading up the backside…But Belvoir Bay had everybody in her sights, so it was no problem.”

The win marked Belvoir Bay’s eighth stakes victory and made her perfect in two main track starts, as she also won the Grade 3, one-mile Torrey Pines Stakes in August, 2016.

Originally scheduled for 6 ½ furlongs down Santa Anita’s hillside turf course, the La Cienegas was shifted to the main track due to significant rainfall overnight and into early this afternoon. As a result, Saturday's running will not be designated as a Grade III stakes, unless the American Graded Stakes Committee, in a decision to be rendered in the coming days, deems it is worthy of graded status.