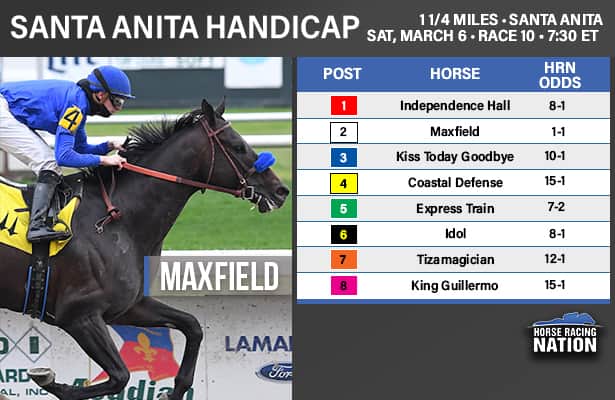 Undefeated in five starts, Godolphin’s homebred Maxfield, who has been installed as the 124 pound highweight, will ship in from his New Orleans base to head Saturday’s Grade 1, $400,000 Santa Anita Handicap.

The Big ’Cap, which has attracted a field of eight older horses and will be run for the 84th time at the North American classic distance of a mile and one quarter, is also leg one in the inaugural $1 million Wild West Bonus, which is comprised of the Big ’Cap, the Grade 1 Hollywood Gold Cup May 31 and the Grade 1 Pacific Classic at Del Mar on Aug. 21.  Any horse that’s able to sweep all three stakes would bank a total of $1,870,000.

Trained by Brendan Walsh, Maxfield, a 4-year-old colt by Street Sense, out of the Bernardini mare Velvety, rallied from far back to win the Grade 3 Mineshaft Stakes at 1 1/16-miles by  3 1/4 lengths at Fair Grounds under Florent Geroux, who will be back aboard Saturday.  A Grade 1 winner in his second start at age two in October 2019, Maxfield has three graded victories to his credit. With the Grade I Breeders’ Cup Classic looming in November at Del Mar, “Max” will be getting his first taste of Southern California in the Big ’Cap.

Currently bedded down at Simon Callaghan’s barn, Maxfield arrived at Santa Anita late Monday night according to Walsh, who is also here to accompany his stable star.

“There aren’t a lot of Grade 1’s for older horses this time of year,” said Walsh on Wednesday morning. “The timing is good for the horse, the mile and a quarter will be a good test. There were options at home (Fair Grounds in New Orleans) but this seemed like a good time to ship.”

Although he has rallied from far back in three out of his five starts, he pressed the pace en route to a 2 ½ length win in an ungraded stakes going 1 1/16 miles two starts back at Fair Grounds, demonstrating a versatility that further enhances his chances in the Big ’Cap.

When asked if he thought Maxfield would be as far back early as he was in his most recent start in the Mineshaft on Feb. 13, in which he was 11 lengths off the lead after the first half mile, Walsh responded:  “No, he broke a little slow that day, there was a horse next to him that was acting up.  We’ll have to wait until the draw and take a look at the field, but he’s been up close before and we’ll just have to see where we want to be.”

Prominent among a solid local contingent is C R K Stable’s Express Train, who comes of a huge 3 ¼ length win going a mile and one eighth in the Grade II San Pasqual Stakes on Jan. 30.  Trained by John Shirreffs, Express Train, a 4-year-old colt by Union Rags, was second by 4 ½ lengths to potential superstar Charlatan going seven furlongs two starts back in the Grade I Malibu Stakes on Dec. 26 and will be ridden for the third consecutive time by Juan Hernandez.

A $500,000 Keeneland September Yearling, Express Train sat close to the pace in the San Pasqual and will likely employ similar tactics as he stretches out a furlong on Saturday. With three wins  and as many seconds from eight starts, he appears to be coming to his best as Shirreffs and C R K seek their first victory in “The Granddaddy of Them All."

A well beaten fifth in the opening day Malibu, trainer Michael McCarthy’s Independence Hall rebounded with a big third place finish going a mile and one eighth in the Grade 1 Pegasus World Cup Invitational at Gulfstream Park Jan. 23, a race in which he earned a Big ’Cap best last-out Beyer Speed figure of 104.  A 4-year-old colt by Constitution, Independence Hall is owned by WinStar Farm, LLC, Eclipse Thoroughbred Partners, Twin Creeks Racing Stables LLC and RKV Racing, LLC. He will be making his fourth start for McCarthy in the Big ’Cap and will again get the services of leading man Flavien Prat.

Originally trained by Michael Trombetta, Independence Hall was a Grade 3 winner in his second start at Aqueduct at age two and his fifth and final start with Trombetta, was a well beaten fifth at 3-1 in the Grade 1 Florida Derby four starts back on March 28, 2020. With four wins from eight overall starts, he, like the rest of the field, will be trying a mile and one quarter for the first time on Saturday.

Third as the even money favorite in the San Pasqual Jan. 30, Idol, who shipped in from Churchill Downs to run a close second at 4-1 in the Grade 2 San Antonio Stakes Dec. 26, finished like a horse who should run better with added distance, which is further evidenced by a 5 ¾ length allowance win going  1 3/16 miles at Churchill three starts back on Nov. 8.

Trained by Richard Baltas and owned by Calvin Nguyen, this 4-year-old colt by Curlin has been ridden by eastern-based Gabriel Saez in his last four starts, but will be handled for the first time Joel Rosario in the Big ’Cap.  With an overall mark of 5-2-2-1, Idol rates a big chance to spring an upset.

Although a well beaten sixth in the Grade 1 Pegasus World Cup at Gulfstream Jan. 23, Coastal Defense lends credible depth to the Big ’Cap field for trainer Dale Romans.  Currently based at Gulfstream, this 5-year-old full horse by Curlin was a close fourth in a pair of Kentucky Stakes two and three starts back—the Grade 1 Clark at Churchill Downs on Nov. 27 and the Grade 2 Fayette at Keeneland Sept. 27.  Owned by Albaugh Family Stables, LLC and the Helen K. Groves Revocable Trust, Coastal Defense is stretching out a furlong off of three consecutive races at a mile and one eighth and can employ a stalking or off-the-pace style when ridden for the first time by John Velazquez.