Here are Cox's plans for his big 3 Kentucky Derby hopefuls 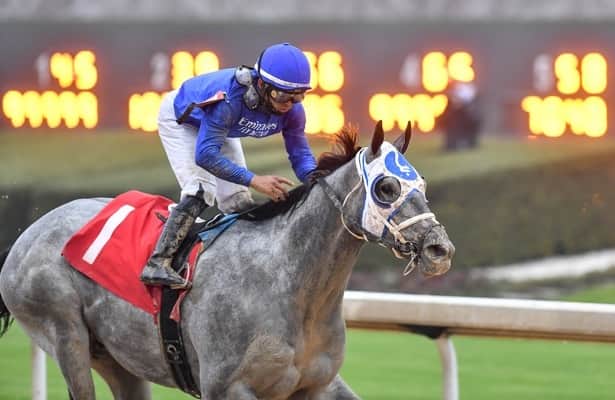 Essential Quality received a preliminary Beyer Speed Figure of 96, a career high, for his 4 1/4-length victory in the Southwest, Oaklawn’s second of four Kentucky Derby points races. The odds-on favorite under Luis Saez, Essential Quality ($3.80) covered 1 1/16 miles over a sloppy track in 1:45.58. The gray son of Tapit was making his first start since clinching an Eclipse Award as the country’s champion 2-year-old male after winning the Breeders’ Cup Juvenile Nov. 6 at Keeneland.

"Big performance off the layoff," Cox said. "Hopefully, we can take another jump or two forward, I think, in order to win the Derby. Hopefully, he has it in him. It was a very nice race yesterday."

Essential Quality, a homebred for Godolphin LLC, will return to his winter base at Fair Grounds to begin major preparations for his final Kentucky Derby prep, Cox said, although he’s "not sure" when the colt will leave Hot Springs. Cox said the $800,000 Blue Grass Stakes (G2) on April 3 at Keeneland and the $1 million Arkansas Derby (G1) on April 10 at Oaklawn are the most likely next-race targets.

"We’ll get with the Godolphin team, between Jimmy Bell and Dan Pride, and come up with a plan," Cox said. "I’d have to say either the Blue Grass or the Arkansas Derby. That’s about the only thing, really, that makes sense. If something happens as far as weather goes, I guess you could probably look at the Florida Derby. But in this region of the country, I think the most logical spot would be the Arkansas Derby or the Blue Grass."

Cox has never had a Kentucky Derby starter, but he has three live contenders two months before the first leg of horse racing’s Triple Crown.

"It’s all coming together like we kind of envisioned it a couple of months ago," Cox said. "But we’ve got two more months, and on the Derby trail that’s a long way."

Mandaloun (52 points) ranks second on the Kentucky Derby points leaderboard, according to Churchill Downs. Essential Quality earned 10 points for his Southwest victory and is No. 3 with 40. Caddo River (10) is No. 18.

The Rebel will offer 85 points (50-20-10-5, respectively) to the top four finishers toward starting eligibility for the Kentucky Derby, which is limited to 20 starters. Caddo River collected 10 points for his 10 1/4-length victory in the Smarty Jones. The Louisiana Derby, Blue Grass and Arkansas Derby are all 170-point races (100-40-20-10).

"He needs to run in a race with some points," Cox said of Caddo River. "Obviously, Essential Quality had 30 going into yesterday. Picked off 10, so 40 is obviously a good number, with another chance at a 100-point race at some point. Mandaloun is at 52. He’s in good shape. Obviously, he’ll get a chance at his 100-point race. Caddo River’s the one that’s going to have to step up in a points race and pick off some points."

Caddo River had been training at Oaklawn before Cox said he moved the colt to Fair Grounds Feb. 11, just as harsh winter weather was beginning to envelope Hot Springs. Oaklawn lost eight live racing dates and 11 days of training because of heavy snow and arctic temperatures. The Southwest originally was scheduled to be run Feb. 15 before being postponed twice. Caddo River has recorded three published workouts at Fair Grounds, including a 5-furlong bullet (:59.60) on Feb. 20.

Keepmeinmind had been scheduled to make his 3-year-old debut in the Southwest before weather-related training setbacks led Diodoro to opt for the Rebel. Keepmeinmind returned to the work tab Friday morning at Oaklawn, working 5 furlongs in 1:03.20 under regular rider David Cohen. The track was rated sloppy.

"Very strong gallop out," Diodoro said. "He was rolling on the gallop out."

Unraced since a last-to-first victory in the Kentucky Jockey Club Stakes (G2) Nov. 28 at Churchill Downs, Keepmeinmind has recorded seven workouts this year at Oaklawn. Prior to breaking his maiden in the Kentucky Jockey Club, Keepmeinmind finished second in the Breeders’ Futurity Oct. 3 at Keeneland and third in the Breeders’ Cup Juvenile Nov. 6 at Keeneland.

"The winner is a very nice horse," Diodoro said Sunday morning. "The way the track and the weather was, I’m kind of glad we didn’t run. Not saying that couldn’t happen in three weeks, either. Hopefully, not. The track has taken a beating here the last couple of weeks. No one can stop Mother Nature."

Southwest runner-up Spielberg came out of the race in "great shape," Hall of Fame trainer D. Wayne Lukas said Sunday morning. Lukas and assistant Sebastian Nicholl have been caring for the Baffert-trained Spielberg since he was flown Wednesday from Southern California to Arkansas. Baffert said next-race plans are pending for Spielberg, who overcame a horrific start to finish 4 1/4 lengths ahead of multiple Grade 1 winner Jackie’s Warrior.

"There’s not a plane for a little while there," Baffert said. "I haven’t really mapped out anything. I wanted to see how he handled that track and all. I’m very happy with the effort. He shipped well. He behaved himself. Other than the gate, everything went well."

Baffert has won the Rebel a record seven times, including last year’s running with Nadal. Concert Tour (2 for 2) broke his maiden Jan. 15 at Santa Anita and won the $200,000 San Vicente (G2) Feb. 6 at Santa Anita. Nadal’s resume was exactly the same entering the Rebel.