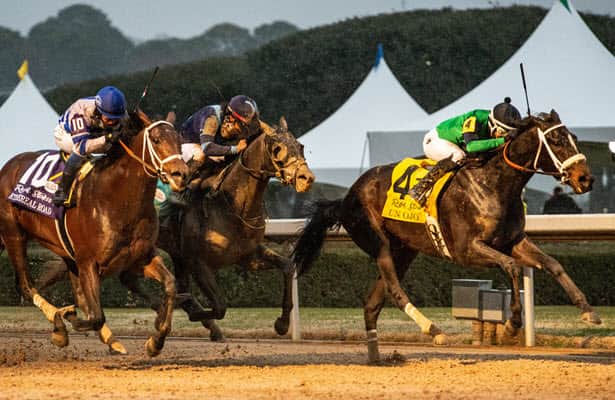 Un Ojo punched his ticket to this year's Kentucky Derby when slipping through on the rail and pulling off a massive upset in the Grade 2, $1 million Rebel Stakes at Oaklawn Park for trainer Ricky Courville.

Sent off at 75-1, Un Ojo and Ramon Vazquez saved ground along the rail while stalking fractions of 23.42, 48.86 and 1:14.30 for six furlongs set by Kavod as odds-on favorite Newgrange pressed the pace. As the field turned into the stretch, Un Ojo momentarily looked to be losing ground, but the New York-bred son of Laoban re-rallied in mid-stretch to earn his first stakes win.

One eye but a BIG heart! #NYbred Un Ojo, by the late @sequelnewyork stallion Laoban, is firmly on the @KentuckyDerby trail with a big upset of the G2 Rebel! Southern Equine bred Cypress Creek's gelding, Ramon Vazquez up for Courville. pic.twitter.com/16TUk6MZZ9

Un Ojo completed 1 1/16 miles in 1:45.69, which was about a second slower than Secret Oath's win in the Honeybee (G3) earlier on the card. The gelding earned 50 qualifying points for the Kentucky Derby, which should be enough to make the starting gate on May 7.

Ethereal Road, a stablemate of Secret Oath for trainer D. Wayne Lukas, got 20 points for second. He was followed across the wire by Barber Road (10 points) and Kavod (5).

Un Ojo, which means one eye in Spanish, returned $152.80. The on-track crowd Saturday at Oaklawn was 31,000, according to track officials.

Owned by Cypress Creek Equine, Un Ojo made his first three career starts for Courville last year before being sent north to trainer Anthony Dutrow in New York this winter. In two starts at Aqueduct, he was second in both the New York Stallion Stakes and the Wither Stakes (G3) just 21 days ago, which provided four Derby point to Un Rojo.

“It's crazy. It's kind of shared between me and Tony (Dutrow) because I sent him to Tony, to Aqueduct, for the winter and Tony had him until Monday and sent him back to us," Courville said. "Gosh, I feel bad for Tony. The owners kind of decided (on the Rebel). I think Tony was wanting to keep him up there for (next Saturday's) Gotham, but they wanted to not go back to a one-turn mile and (Kevin Moody of Cypress Creek Equine) wanted to send him down here and take a shot at the money. He kept saying the two turns is going to be better for us.”

Un Ojo now sits in second-place on the Kentucky Derby leaderboard with 54 points. Ethereal Road moves up to fourth and Barber Road, who had been second in both the Smarty Jones and Southwest Stakes (G3) leading up to the Rebel, is now fifth with 18 points. Fourth-place finisher Kavod is ranked 19th with seven points. A maximum of 20 horses can start in the Kentucky Derby.

As for Newgrange, trainer Bob Baffert offered no alibi for the beaten favorite.

“I thought he was in a good spot," Baffert said. "When the running started, he didn’t have it today. But that happens. He didn’t show up today. I really can’t think of any excuses.”