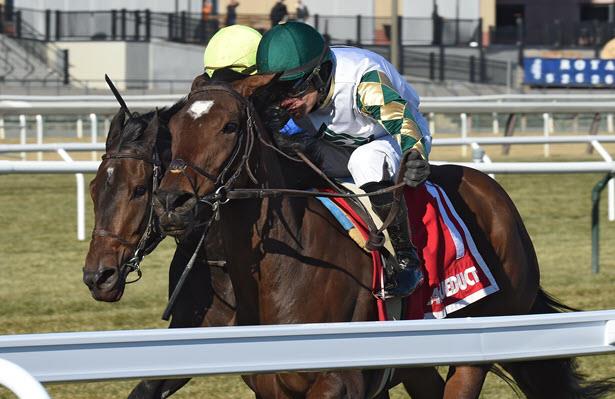 Feel Glorious has finished on the board in each of her last six starts and will look to win her second consecutive stakes contest in Saturday's Grade 3, $100,000 Noble Damsel for fillies and mares 3-years-old and up going one mile on the Belmont Park Widener turf.

The 33rd running of the Noble Damsel is one of two graded stakes on Saturday's card, bolstered by the Vosburgh (G2) for 3-year-olds and up going six furlongs on the main track as part of a "Win and You're In" qualifier to the Breeders' Cup Sprint in November at Keeneland.

Owned by Reeves Thoroughbred Racing and Tango Uniform Racing, the English-bred Feel Glorious defeated fellow Noble Damsel-contender Chaleur in the 1 1/16-mile Perfect Sting on Aug. 14 over firm Saratoga Race Course turf. That marked the Bated Breath filly's first win in three attempts of her 4-year-old campaign, which started with a third-place effort in the New York (G2) going 1 1/4 miles on June 27 at Belmont, followed by another third to next-out winner Nay Lady Nay in the Grade 3 Matchmaker on July 18 at Monmouth Park going 1 1/8 miles.

Feel Glorious has not finished off the board since Aug. 2019 and has posted a 4-2-3 in 11 starts since arriving in the United States from Europe and put in the care of trainer Christophe Clement.

On Sunday, Feel Glorious worked four furlongs in 49.22 seconds on Belmont's inner turf as she prepares to cut back to one mile for the first time since Sept. 2019 when third in the Pebbles over the Belmont turf.

"She worked very well [Sunday] morning. She always runs well, it seems," Clement said. "I think a mile and a sixteenth to a mile and an eighth is probably her best distance. But she's run well at a mile as well, so we're giving it a try."

Trainer Chad Brown will send out a trio of European-bred contenders, including Peter Brant's Blowout, who will be seeking her first graded stakes win after earning placing against such caliber four times in 2019. Bred in Great Britain, the 4-year-old Dansili filly was unraced as a juvenile but has never run off the board in nine starts, running second to eventual Grade 1-winner Concrete Rose in the Florida Oaks (G3) at Tampa Bay Downs and second to Regal Glory in the Lake George (G3) at Saratoga before finishing behind Varenka and Regal Glory again, who dead-heated for the win, in the Lake Placid (G2) later that summer.

Blowout ended her 2019 season with a second to next-out victor Lady Prancealot in the Pin Oak Valley View (G3) in October at Keeneland. Off a 10-month layoff, Blowout made her 2020 bow on August 26 going one mile on the Saratoga turf, where she ran second to Sweet Bye and Bye, who she will rematch in the Noble Damsel. Hall of Famer John Velazquez will ride again from post 4.

Viadera, who like Feel Glorious is an English-bred daughter of Bated Breath, won the one-mile De La Rose over turf labeled good on July 17 at the Spa in her previous race. After making her first nine starts in Ireland, she arrived in North America and was transferred to Brown's care, who saw her run fourth in her first start for him in the Intercontinental (G3)on June 6 going seven furlongs at Belmont.

Stretched out in distance, Viadera, owned by Juddmonte Farms, earned a 91 Beyer Speed Figure last out and will stay at one mile on Saturday, drawing post 1 with Joel Rosario aboard.

Her stablemate, Noor Sahara, ran second to her in the De La Rose, falling a neck short in her North American stakes debut. Bred in Ireland and raced in France, including an off-the-board effort in the Group 1 Prix de Diane and the Group 3 Argana Prix de Lieurey as a 3-year-old last year, Noor Sahara started her 4-year-old year with a third-place effort in a 1 1/8-mile optional claiming race on June 12 at Belmont, finishing just a head back to multiple stakes-placed Wegetsdamunnys.

Noor Sahara will have Jose Ortiz's services from post 7.

Joseph Imbesi's Sweet Bye and Bye started her career with trainer Tony Dutrow in 2017 before being transferred to the care of Pennsylvania-based Steve Klesaris, who conditioned her to five consecutive wins at Parx to start 2018 and also allowed her to have success against optional claiming company, winning at 1 1/16 miles at Belmont in Sept. 2019 and running second in her other two appearances at the track.

With Dutrow taking over the training duties again before the summer, Sweet Bye and Bye ran third in the Caress on Aug. 1 going 5 ½ furlongs on the Saratoga turf before besting Blowout later in the month when stretched out to a mile in an optional claiming event.

"She's completely different now; she was such a little thing as a 2-year-old," Dutrow said. "We liked her, but to see her now as a 5-year-old, you would not believe she would turn out to be the big, gorgeous mare that she's turned into. We feel that she's deserving at running against some very good horses. She couldn't be much better and she's run some big races on the Belmont turf course, so we're looking forward to running her."

Jose Lezcano will have the return call from post 2.

Chaleur, who ran second to Feel Glorious in the Perfect Sting, will make her first graded stakes start for Hall of Fame trainer Bill Mott. After posting two wins in nine starts in her native Great Britain, Chaleur arrived in the country this year and made her first start since being transferred to Mott in May, when she ran third against optional claimers in May at Churchill Downs. A win against the same class going one mile on the Belmont turf inspired the connections to try the Perfect Sting, where she registered a personal-best 92 Beyer.

Hall of Famer Javier Castellano will be in the irons from post 3.

Graded-stakes winner Getmotherarose, conditioned by Tom Bush, has finished no better than fourth in her last four starts but will look to recapture her early season form that won the Honey Fox (G3) going one mile on the Gulfstream Park turf in February.

Kendrick Carmouche will pick up the mount and break from the outermost post 10.

Rounding out the field is Atomic Blonde, winner of the South Beach in January at Gulfstream Park, for trainer Jorge Abreu [post 5, Manny Franco]; and Lemon Zip, looking for her first win as a 6-year-old, for trainer Niall Saville [post 6, Dylan Davis].

Another Broad, trained by Todd Pletcher, is entered for the main track only.