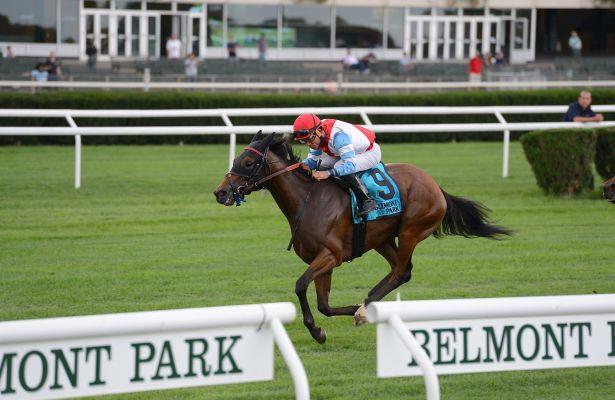 Alex Campbell, Jr.'s homebred Ultra Brat made her turf debut a winning one, gobbling up ground in the stretch and powering to a last-to-first upset of the $100,000 Christiecat, the opening-day feature at Belmont Park.

With Joel Rosario aboard for what would be his third win of the day, Ultra Brat dropped back to last along the rail as Coco as in Chanel and Tizanillusion sped past favored Ava's Kitten to the front, towing the field of 10 3-year-old fillies through an opening quarter-mile in 22.46 seconds and a half in 45.21.

Roused into action on the turn, Ava's Kitten went wide to strike the lead at the top of the stretch with Most Beautiful in close pursuit, only to be overtaken first by Miss Katie Mae on the inside as she split rivals late, and then by Ultra Brat, who went widest of all to win by a neck.

"She had a nice run at the end," said Rosario of Ultra Brat, whose previous victories on dirt came in front-running fashion. "I didn't have a good start and I was worried about that, but I just let her be where she was and let her come with a late run."

The victory was the third in six starts for the Uncle Mo filly, whose lone off-the-board performance this year came when seventh in the Grade 3 Miss Preakness in May at Pimlico Race Course.

"We've always wanted to try her on the grass and this seemed like a good spot," said Alice Clapham, Motion's assistant. "She just broke a step slow out the gate but Joel did the right thing to let her settle there. Then, when she got comfortable, she made a nice move. She's just been getting stronger throughout the year and as she develops as a 3-year-old we've just been happy with the way everything's been going."

Miss Katie Mae was a half-length in front of third-place finisher Ava's Kitten, with Most Beautiful a neck back in fourth. Sky My Sky, Coastal Sea, Tizanillusion, Athena's Aegis, Malibu Stacy and Coco as in Chanel completed the order of finish.