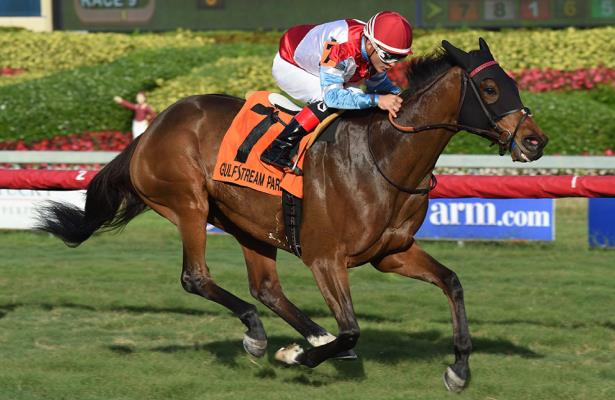 Patience paid off for owner-breeder Alex G. Campbell Jr. Saturday at Gulfstream Park, when his 5-year-old homebred mare Ultra Brat scored the first graded triumph of her career in the $150,000 Marshua’s River (G3).

A bay daughter of champion racehorse and prolific sire Uncle Mo, Ultra Brat ($10.80) completed the distance in 1:45.35 over a firm turf course under jockey Nik Juarez to win by 1 ¾ lengths in just her second start off an 11-month layoff.

“I was thrilled with the race,” Campbell said. “The jockey rode a great race. She’s coming on late but we’re hoping she’s going to be a good filly. We’ll race her the whole year. “

It was the second win for Ultra Brat in as many tries on the Gulfstream turf, following her one-length triumph in the Tropical Park Oaks in December 2016. Trained by Graham Motion, she did not race again until tiring to fourth, beaten just three lengths, in the six-furlong Autumn Days Stakes Nov. 26 at Aqueduct.

“She just had nagging problems and we gave her a break, and it just took her a little longer to get back to the races than I thought. It looks like it worked out pretty well,” Motion said. “It’s just a matter of being patient. We’re lucky to train for someone like Mr. Campbell who’s prepared to let you do that. Not everybody lets you do that.”

Gianna’s Dream, beaten a neck in her previous start in the one-mile My Charmer (G3) Dec. 16 at Gulfstream, was taken straight to the lead by jockey Tyler Gaffalione and posted fractions of 26.37 and 51.42 seconds with Ultra Brat settled in second. The top two left the backstretch and rounded the turn together as Grade 1 winner Dream Dancing, the 8-5 favorite, began to launch her bid on the outside.

Ultra Brat assumed the lead and began to separate from the field as Gianna’s Dream dropped back and Dream Dancing came calling at the head of the lane, and had plenty left to repel the challenge.

“That was a perfect trip,” Juarez said. “We got Ultra Brat to relax outside Gianna’s Dream. On the backside, I knew I had a ton of horse. We had her relaxed sitting off Gianna’s Dream and when I asked her to run, she was much the best.”

Dream Dancing finished second, 1 ¼ lengths ahead of King’s Ghost. Marty Wolfson-trained stablemate Inside Out was fourth, followed by Abbreviate and Gianna’s Dream.

“The one thing Nik said was that he just wanted her relaxed because she was pretty keen last time sprinting. But it set up well today. She likes this track. It obviously suits her,” Motion said. “I think this is probably her optimum, a mile, mile and a sixteenth. I don’t know that she wants to go much further than that. This was a good spot for her.”