U S Navy Flag cuts back to win July Cup, aiming for The Everest 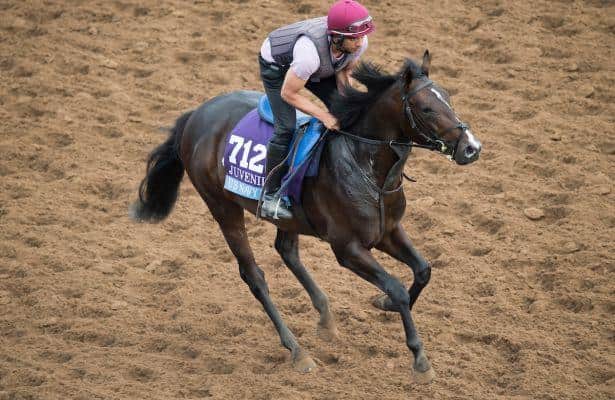 The Aidan O’Brien-trained U S Navy Flag picked up his third Group 1 win Saturday in the Darley July Cup at Newmarket. It was the first win of the season for the Kentucky-bred son on War Front, who successfully cut back in distance.

Owned by Coolmore, U S Navy Flag was game down the center of Newmarket’s stretch under Ryan Moore, running near the front throughout the six furlongs. When challenged by Brando, Moore powered U S Navy Flag into the clear and hit the wire first. Brando and Fleet Review finished second and third.

U S Navy Flag flies home in the @DarleyStallions July Cup, leading from start to finish for Ryan Moore and Aidan O'Brien ?? pic.twitter.com/uOYChXxQZN

Godolphin's Blue Point, who came into the July Cup off a win in the Group 1 Kings Stand at Royal Ascot and was favored to win, finished seventh.

“The plan was, if it went well, that we would give him a rest and go down and train him for The Everest in Australia,” O’Brien told Racing UK.

The Everest, run for the first time in 2017, takes place Oct. 13 at Royal Randwick and boasts a $13 million purse. Like the Pegasus World Cup at Gulfstream Park, each of the 12 entry slots must be purchased to compete. Coolmore held a spot in the race but had not confirmed a horse for the prestigious turf sprint before the July Cup.

The July Cup was the fifth win for U S Navy Flag in 16 career starts.