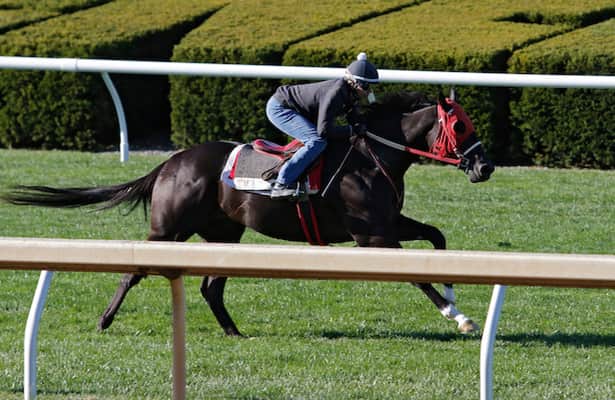 Trainer Tim Martin experienced a wide range of emotions as he watched the Breeders’ Cup Juvenile Turf Sprint last Friday. Tyler’s Tribe, his Iowa sensation, displayed blistering early speed only to later be eased by jockey Kylee Jordan because of exercise-induced pulmonary hemorrhage and vanned off.

The thrill of the auspicious beginning gave way to anger because Martin said Tyler’s Tribe had never bled in dominating his five previous starts by a combined 59 3/4 lengths. All of those had come at Prairie Meadows, where Lasix is permitted. The Breeders’ Cup bans Lasix as a race-day medication.

The more Tyler’s Tribe bled – Martin said the hemorrhaging continued at the barn – the angrier his trainer became. That emotion is not about to ease any time soon.

“What are we doing? Do we care about the horse?” Martin said. “I just don’t understand it. If the horse needs Lasix, why not give him Lasix?”

Martin, 59, has been a trainer since 1985. He went on, “We’re supposed to be protecting the horse. We’re protecting nothing. Lasix ain’t hurt nothing. It just helps the horse.”

According to the veteran conditioner, the gelded son of Sharp Azteca was stabilized by nightfall in time for the horse to eat dinner. He said he had no reason to believe a bleeding problem might arise during the Breeders’ Cup at Keeneland.

“He didn’t show me any sign in workouts. When I breezed him, no bleeding,” Martin said. “I didn’t see that coming.”

Tyler’s Tribe was shipped from Keeneland to Royal Training Center in Royal, Ark., and will be given time off. Martin co-owns that facility with his brother, Bill.

Tyler’s Tribe is owned by Martin and Tom Lepic. He was named after Lepic’s 8-year-old grandson, Tyler, who recently was declared cancer-free after an arduous two-year battle with leukemia.

Tyler’s Tribe has never run beyond six furlongs. Martin believes, though, that the youngster might prove he can stretch out well enough to earn a spot in the Kentucky Derby starting gate.

“I always felt when he ran long, he would be really good,” he said. “He’s got natural speed. He can put himself wherever he wants. He’s not a speed-crazy horse. He settles.”

Martin hopes to get answers as soon as the calendar flips to 2023. Tyler’s Tribe will be pointed toward the one-mile Smarty Jones Stakes on New Year’s Day at Oaklawn Park. If all goes well, he will follow Oaklawn’s Derby prep schedule.

Tyler’s Tribe had never competed on turf before the Breeders’ Cup. He is not likely to return to the grass any time soon.

“When he went on the turf, he started washing out,” Martin noted. “He’s a very smart horse. I don’t know if he didn’t want to run on it, but I saw him sweating all over. He didn’t want to load and he was sweating real bad. I didn’t like that at all.”

It was almost as if Tyler’s Tribe sensed the trouble ahead.