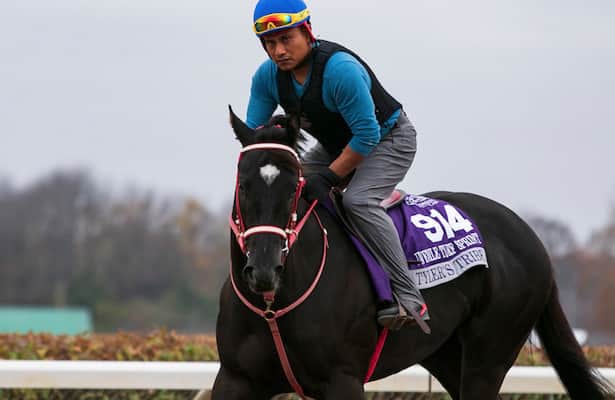 Four-time stakes winner Tyler’s Tribe was preparing to work Saturday morning at Oaklawn when his maintenance breeze was unexpectedly delayed several minutes because outriders were trying to corral a loose horse on the track.

Get expert picks for Oaklawn

Kylee Jordan, the regular rider of Tyler’s Tribe, improvised during the delay just after the second surface renovation break, steering the gelding into the winner’s circle across from the finish line to chill.

Five weeks after a noteworthy hiccup in a previously spotless career, Iowa-bred sensation Tyler’s Tribe will try to return to the winner’s circle in the $150,000 Advent Stakes for 2-year-old sprinters Friday at Oaklawn.

Co-owned and trained by Tim Martin of Hot Springs, Ark., Tyler’s Tribe won his first five career starts, all dirt sprints at Prairie Meadows in Iowa, by a combined 59 3/4 front-running lengths before the wheels fell off in the $1 million Breeders’ Cup Juvenile Turf Sprint on Nov. 4 at Keeneland.

Tyler’s Tribe led early, began to back up on the turn, was eased in the stretch and then vanned off after bleeding. On a scale of 1 to 5, Martin called the bleeding incident, “a 5.”

Tyler’s Tribe was racing without Lasix for the first time last month (it is prohibited in the Breeders’ Cup), but he will be able to compete on the anti-bleeder medication Friday.

Martin said he also considered Tyler’s Tribe for the $250,000 Smarty Jones Stakes at 1 mile Jan. 1 at Oaklawn, but decided to pass because Lasix is prohibited in Kentucky Derby points races.

An appearance in the Advent, Martin said, was contingent on a clean endoscopic examination after Saturday’s breeze. Tyler’s Tribe, in his second local work, covered three furlongs in 37.6 seconds over a good-rated surface. He also worked a half-mile in 50.2 seconds over a muddy strip Nov. 25.

“Two times I scoped him,” Martin said Wednesday morning. “I worked him twice and scoped him twice, and he was good. If he had anything, I wouldn’t run him. But he’s clean and looked good.”

From the first crop of millionaire Grade 1 winner Sharp Azteca, the physically imposing Tyler’s Tribe crushed his competition at Prairie Meadows. He won his 4 1/2-furlong debut June 20 by 16 3/4 lengths and toppled open company in two stakes races, including a 15 1/2-length romp in the $100,000 Prairie Meadows Freshman Aug. 27.

Tyler’s Tribe earned a career-high 94 Beyer Speed Figure for his runaway victory in the six-furlong Prairie Meadows Freshman. That speed rating, through Tuesday, ranked as the co-eighth-highest in the country this year for a 2-year-old in a sprint race, according to Daily Racing Form. Tyler’s Tribe owns other Beyers of 90, 89 and 86, figures that also tower over his Advent rivals.

“I like him,” said Martin, who races Tyler’s Tribe with Iowan Thomas D. Lepic. “I like him wherever he’s at (post position). He gets out really good, so I like him in the race. There’s a lot of speed, but we’re speed. He’s fast on dirt. He acts like he handles the track really good.”

Tyler’s Tribe, a $34,000 yearling purchase, has earned $306,294 for Lepic and Martin, the latter seeking his first career Oaklawn stakes victory in open company. In 2017, Martin saddled Racer to victories against state-breds in the $100,000 Nodouble Stakes and $100,000 Arkansas Breeders’ Stakes. Martin has 144 victories overall at Oaklawn, the first coming in 1984.

The Advent is the first of a record 45 stakes races scheduled to be run during the 2022-23 Oaklawn meeting, which ends May 6. Corresponding to a December opening for the first time in Oaklawn history, the Advent debuted in 2021 and was the first stakes race for 2-year-olds at Oaklawn since 1973.