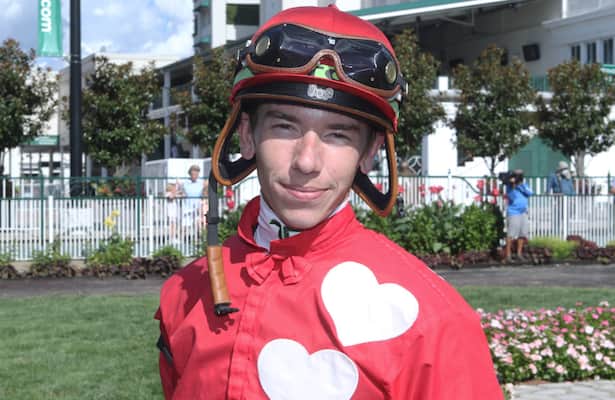 At just 27 years old, jockey Tyler Gaffalione has become a household name with racing fans across the U.S. and especially in Kentucky where he clinched the eighth Churchill Downs leading rider title of his young career at the 2022 spring meet.

The Florida native has a strong pedigree when it comes to riding horses. Both his father, Steve, and grandfather, Bobby, were jockeys. His father was in attendance Kentucky Derby Day at Churchill Downs when Gaffalione rode White Abarrio in the $3 million Kentucky Derby.

Even though Gaffalione didn’t ride White Abarrio to victory in the Run for the Roses, he scored nine stakes victories during the spring meet with one day of racing remaining. It was the most stakes wins at a Churchill Downs meeting since Robby Albarado recorded eight spring meet stakes wins in 2005.

Gaffalione’s purse earnings was No. 2 in the recorded history of the spring meet behind Stewart Elliott’s $5,844,800, which includes a $5 million Oaklawn Park bonus for winning the 2004 Kentucky Derby aboard Smarty Jones.

So, what’s next for Gaffalione?

Gaffalione and fiancé Cassidy Edwards are scheduled to get married next week in Schoharie, N.Y., about an hour's drive from Saratoga Race Course where he’ll ride this summer.

With one day of racing remaining, Richard Rigney’s Rigney Racing has clinched the spring meet owners’ title with at least seven wins beneath the historic Twin Spires.

Rigney’s unmistakable red silks with three white hearts also had some tough beats at the meet. His horses made 33 starts and finished second eight times by 2 1/4 lengths or less. Nevertheless, his purse earnings were $606,907 with a 21 percent win clip and 58 percent top three.

“It’s truly a blessing to all of us,” Bauer said. “It means the world to our whole team. We’re thrilled.”

Not only is Rigney winning on the frontside of Churchill Downs, the Louisville Ky.-based entrepreneur is one of the biggest supporters of the Backside Learning Center, a nonprofit organization building community and enriching the lives of backside workers and families at Churchill Downs.

Rigney had a previously-scheduled family vacation and will not be on hand Monday to receive his trophy. Instead, he’ll be represented by Bauer and several friends, family and colleagues.

Juddmonte, along with Gary and Mary West, were tied for second with six wins. Both ownerships do not have any entries Monday.

Trainer titles up for grabs between Asmussen, Cox

On closing day of the spring meet, Hall of Fame trainer Steve Asmussen will be in search of his 26th Churchill Downs title with a one-win cushion over Brad Cox, who seeks his fifth local crown.

Trainer Kenny McPeek also had a strong spring meet with 16 wins and was in third in the standings in front of Joe Sharp’s 15 wins and Mike Maker’s 13.