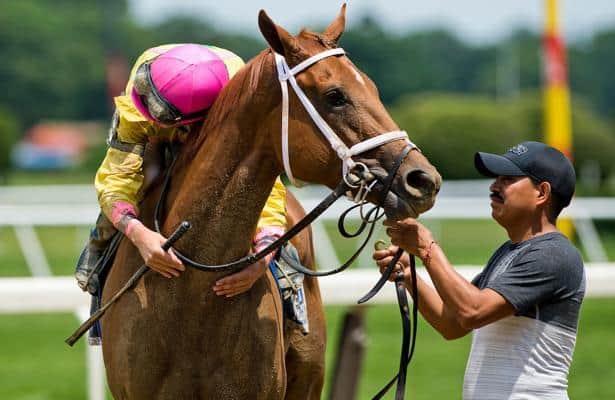 Monomoy Girl, the two-time Eclipse Award winner and seven-time Grade 1 winner, has been retired from racing after she was discovered to have sustained an injury during training Tuesday at Churchill Downs.

“Monomoy Girl went out for a routine gallop Tuesday morning and came back a little off in her right front leg. We had it x-rayed and found a non-displaced fracture of the sesamoid. Obviously, we’re very disappointed,” trainer Brad Cox said. “She’s walking sound today and it’s not anything that will require surgery. It’s just unfortunate that it will end her racing career.”

Owned by My Racehorse, Spendthrift Farm and Madaket Stables, Monomoy Girl had been making a return to racing following a break over the spring since her narrow runner-up finish to Letruska in Oaklawn’s Apple Blossom S. (G1) in April. The 6-year-old chestnut mare retires with 14 wins and three seconds from 17 lifetime starts.

“I’m going to miss having her around and not being able to put a saddle on her again, but Monomoy Girl owes us nothing,” said Cox. “She’s an unbelievable mare and will always hold a special place in my heart as our first Oaks winner, Breeders’ Cup winner and champion. She will go to Spendthrift to start her breeding career and I’m sure she’ll be an awesome mom.”

Spendthrift’s Ned Toffey said that Monomoy Girl is expected to come to the Lexington-based farm this week to settle into her new career as a future broodmare. Breeding plans have not yet been determined.

“Certainly, we are disappointed, especially for all of our partners,” said Toffey. “While we were hopeful to get her back to the races this year, we won’t lose focus on what is most important and that is a healthy Monomoy Girl. She’s an all-time great and we look forward to the next chapter of her career and giving her a great life on the farm at Spendthrift.”

A stakes winner at two, Monomoy Girl went on to capture four consecutive Grade 1 victories as a 3-year-old including the Ashland, Acorn, CCA Oaks and storied Kentucky Oaks. She returned to Churchill Downs later in the year to become just the eleventh 3-year-old to win the Breeders’ Cup Distaff (G1), earning her first Eclipse Award as the 2018 Champion 3-Year-Old Filly.

Setbacks caused Monomoy Girl to miss a 4-year-old campaign, however, she returned at five in career form, ripping off four straight wins and punctuating a perfect season with another Breeders’ Cup Distaff triumph last November at Keeneland. She earned her second Eclipse Award, this time as the 2020 Champion Older Dirt Female.

Monomoy Girl set a world record last fall after selling for $9.5 million as a racing/broodmare prospect at the Fasig-Tipton November Sale. Spendthrift elected to keep her in training and partnered with MyRacehorse to offer microshare ownership in the superstar racemare for her 2021 campaign. Monomoy Girl won the Bayakoa S. (G3) at Oaklawn in her seasonal debut before her nose defeat to divisional frontrunner Letruska, earning a 102 Beyer – the second highest Beyer of her career.

With earnings of $4,776,818, Monomoy Girl ranks as the fifth highest-earning dirt female of all time, joining an illustrious top 5 list that includes Midnight Bisou, Zenyatta, Beholder and Royal Delta.