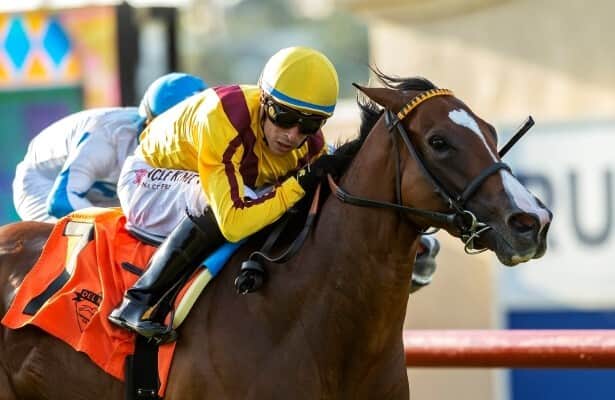 It was an old-fashioned throw-down between two extra-fast Thoroughbreds Friday at Del Mar: the gray mare Leggs Galore and the young bay filly Twilight Gleaming. They hooked up out of the gate in the five-furlong turf test and battled all the way around the bend until the 3-year-old began to inch clear in the straight and go on to a half-length victory in the $104,100 Daisycutter Handicap.

The winner, a 3-year-old Irish-bred by National Defense, is owned by the Stonestreet Stables of Barbara Banke of Lexington, KY. She won her fifth race in her eighth career start, and has never finished lower than second. Twilight Gleaming earned $60,000 in the process to fatten her bankroll to $781,867. She had won the Breeders’ Cup Juvenile Turf Sprint at the same five-furlong distance at Del Mar last November.

Twilight Gleaming is trained by Wesley Ward, who shipped her in from Saratoga for the race and deputized west-coaster Blake Heap to saddle her. She was ridden by Del Mar’s leading rider, Juan Hernandez, who won another race on the card and now has nine through the first five days of the meet.

Twilight Gleaming’s chief rival in the Daisycutter, William Sims’ Leggs Galore, hung on gamely through the stretch but was outnodded for second at the wire by the 29-1 shot Xmas Surprise, who is owned by Marsha Naify.

Said winning rider Juan Hernandez about Twilight Gleaming's trip, “She broke a step slow, but she’s got speed. I kept her outside a little bit away from that speed horse inside us (Leggs Galore). But when we started to go for home, she was pulling on me; she wanted to go. She changed leads at the quarter pole and she really ran. She’s a good one.”