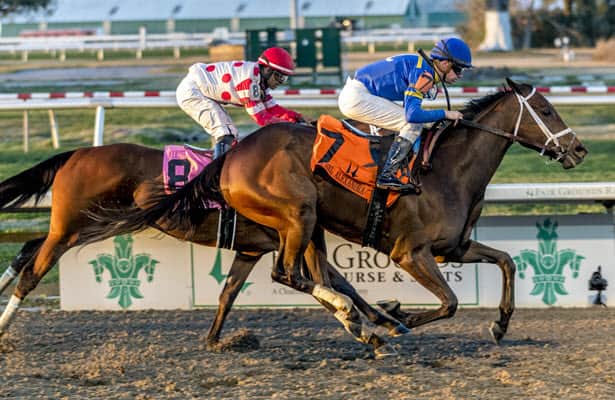 Turnerloose (17-1), who had never raced before on dirt, punched her ticket for the Kentucky Oaks on Saturday by winning the Grade 2, $300,000 Rachel Alexandra Stakes at Fair Grounds.

Ridden most of the way in mid-pack by Florent Géroux, the Nyquist filly rallied four-wide in the stretch, caught another closer, Goddess of Fire (15-1), at the wire and won by a half-length.

The victory came after a last-place disappointment in the Breeders’ Cup Juvenile Fillies Turf. Trainer Brad Cox sent Turnerloose there after she won the Juvenile Fillies Stakes last summer at Kentucky Downs and finished a close third after setting the pace in the Jessamine (G2) at Keeneland.

It was not as if the main track was completely out of mind for the $50,000 yearling purchase by Ike and Dawn Thrash.

“She worked well on the dirt last fall,” Cox said. “We started her on the turf because of the distance. Kentucky Downs was giving away a lot of money (last summer). There was a half-million reasons to try the (Juvenile Fillies Stakes), and she didn’t do a thing wrong.”

Awake at Midnyte (9-2) finished 3 1/4 lengths up the track in third with post-time favorite Hidden Connection (2-1), the early pacesetter, another head behind in fourth.

La Crête (6-1) had the lead on the backstretch but was pulled up by jockey Joel Rosario before the second turn. The filly was subsequently diagnosed with a condylar fracture that was not considered life-threatening, according to a Tweet from owner Stonestreet Stable.

For the top four finishers, the Rachel Alexandra was worth 50-20-10-5 points toward qualifying for the Kentucky Oaks.

The Fair Grounds Oaks “and the Ashland are the two logical spots moving forward,” Cox said. “The Ashland is a Grade 1; that plays a big role with these fillies. We’ll let the dust settle and come up with a gameplan.”