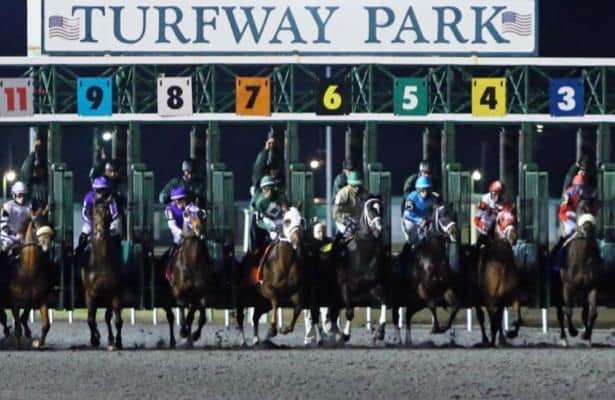 Racing returns to Turfway Park in northern Kentucky on Wednesday evening with a new look that includes a partially-built grandstand, precluding fans from attending regardless of COVID safety protocols, and a new Tapeta-brand synthetic racing surface to add to the horseplayers’ puzzle.

Turfway Park is set to host a 13-day “holiday” meet that runs through the end of December followed by a longer winter-spring meet starting in early January and running through late March. Racing the first two weeks of the first meet will be conducted on a Wednesday through Saturday basis with a first post of 6:15 p.m. EST. For the remainder of the meet the schedule will vary due to the holidays.

Turfway’s new Tapeta main track is part of a larger renovation to the facility being undertaken by Churchill Downs Inc., which purchased the property in October 2019. CDI’s first order of business was to raze the aged grandstand upon the conclusion of the most recent meet this past spring. It is slated to be replaced by a new structure that in addition to trackside seating will include a space for historical racing machines, which are casino-type devices that have proven a major boon to purse accounts in Kentucky.

Unfortunately for CDI and Turfway, those plans are currently on hiatus. Construction on the new facility was paused by CDI earlier this year after the Kentucky Supreme Court ruled a particular type of historical racing machine that was in use violates state gaming laws and are unconstitutional. Track operators throughout Kentucky, including CDI, are awaiting further clarification on the ruling.

The new Tapeta main track replaces the Polytrack surface that had been employed since 2005 and had shown deterioration in recent years. It has been in use for training since November and has drawn seemingly unanimous praise from horsemen. Among those are top conditioner Brad Cox, who will have a string at Turfway Park for the first time in more than a decade.

“I am really looking forward to having horses stabled at Turfway Park this winter,” Cox said. “It will be the first time I have had horses stabled at Turfway since 2008 and this allows me the opportunity to race year round in Kentucky. Our horses have been training for a few weeks over the new Tapeta track and it appears to be an excellent racing surface. We are excited to be there.”

Turfway will have a limited stakes schedule during the holiday meet before things heat up at the start of the new year. Most notably, the winter-spring meet will host not one, but two official stops on the road to the Kentucky Derby. In addition to the usual Jeff Ruby Steaks (G3) tentatively scheduled for March 20, the John Battaglia Memorial will also serve as a points-paying prep for the Kentucky Derby. It is scheduled for Feb. 6.

In addition to Cox there are several other new trainers expected to have a presence at Turfway Park this winter. They include Hall of Famer Mark Casse, Mike Tomlinson, Jonathan Thomas and Eddie Kenneally. Among the mainstays returning are leading 2019-20 trainer Mike Maker and Wesley Ward.

The jockey colony will also feature several new faces. They include Chris Landeros, who will remain in his home base of Kentucky for the winter; and Reylu Gutierrez, who has spent previous winters in New York.

The wagering menu at Turfway Park will include a 50-cent Pick 5 on races 1-5 and a 20-cent Single Six jackpot wager on races 3-8. Both have a takeout of 15 percent.