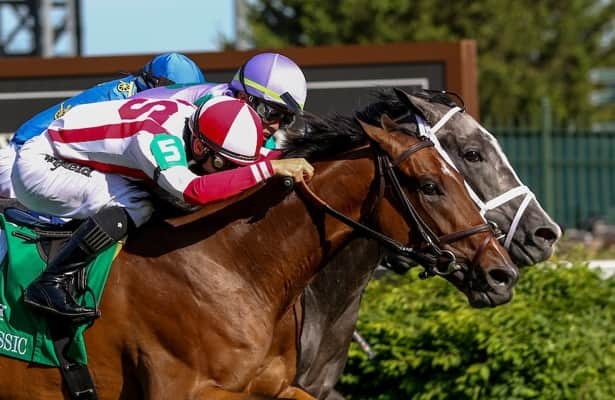 In a stretch battle to the wire between favored Colonel Liam and 5-1 Domestic Spending, the result was a dead heat in the $1 million Turf Classic (G1) at Churchill Downs on Saturday.

"I had no idea," Domestic Spending's rider Flavien Prat said after the race. "To be honest I did not know. Right past the wire I knew I was a lick in front but I had no idea if I got there on time."

IT'S A DEAD HEAT!

At the top of the stretch, Smooth Like Strait held the lead, but Colonel Liam, trained by Todd Pletcher, came from the outside to grab the lead late. Domestic Spending, trained by Chad Brown, came from farther outside, catching Colonel Liam at the wire. After a review, the race was declared a dead heat.

"He was coming," Colonel Liam's jockey, Irad Ortiz Jr., said of Domestic Spending after the race. "He just got there in the last couple of jumps."

Colonel Liam came into the race off a victory in the Muniz Memorial Classic (G2) over the lawn at Fair Grounds. Domestic Spending came in after winning the Hollywood Derby (G1) at Del Mar in November.

Analysis: Baffert pair looks vulnerable in Preakness
The field for the $1 million Preakness Stakes will...